The second batch of self-protection squads in Tartous finishes training 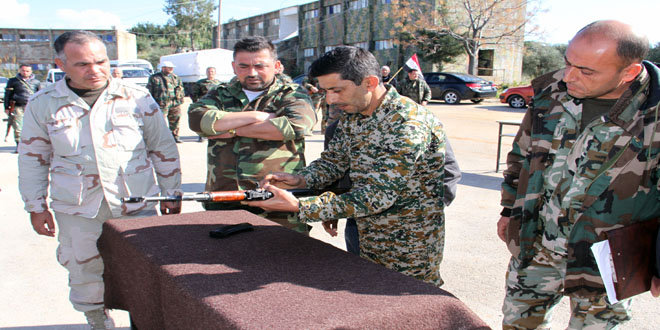 Tartous, SANA- The second batch of the self-protection squads in Tartous on Monday finished training to support the Syrian Arab army in its war against the Takfiri terrorism.

The batch embraces 180 persons from different villages and towns in Tartous province who were trained over 15 days on combat skills to protect their villages and public and private properties, the infrastructures and the facilities where they live or work.

Tartous Governor Safwan Abu Sa’adi underlined the importance of benefiting from the military sciences and to apply the trainings provided to the squads on the ground to protect the safe province from any terrorist acts and from their repercussions.

On Saturday, the fifth batch of self-protection squads finished their training and were given a graduation ceremony to assist the Syrian Arab Army through protecting their towns and villages from terrorists.