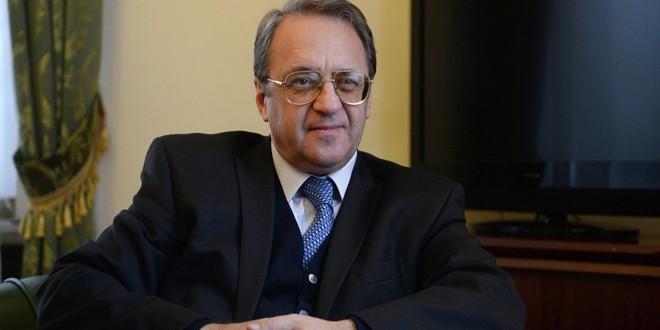 Moscow, SANA – Russian Deputy Foreign Minister Mikhail Bogdanov said that the possibility of delaying the Syrian-Syrian talks scheduled to be held on January 25th in Geneva will become clear following a meeting between Russian Foreign Minister Sergey Lavrov and US State Secretary John Kerry which will take place on Wednesday in Zurich, Switzerland.

Answering a question by journalists regarding this matter, Bogdanov also said that UN Special Envoy on Syria Staffan de Mistura is making the arrangements for the talks, but Bodganov believes that this matter will become more clear following the meeting between Lavrov and Kerry.

Churkin added in an interview with Russia 24 Channel that the UN Security Council’s members hope the US-Russian meeting would be a new step that paves the way for the start of the talks.