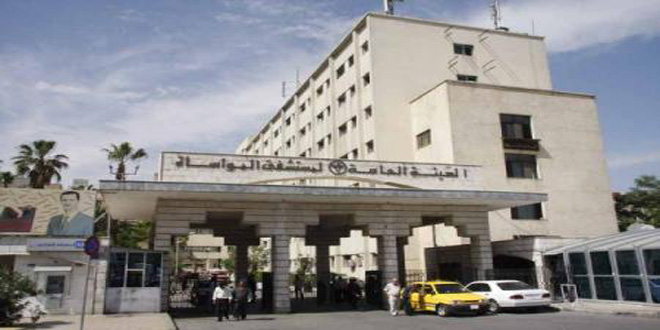 Damascus, SANA- In spite of the challenges imposed on the health sector due to the current crisis and the shortage in the medical and nursing cadres, al-Mouwasat University Hospital in Damascus continues providing free diagnostic and therapeutic services for the patients in addition to educational and training services for the students. “Al-Mouwasat hospital is exposed to a considerable pressure from the beginning of the crisis where it has received complicated cases resulting from injuries caused by the mortar shells attacks, terrorist explosions and incidents related to the current situations, but thankfully we dealt with them and provided the necessary treatment to the fullest,” Director of the hospital Dr. Hashem Saqer told SANA.

Saqer added although the shortage and leakage of the medical cadres in the hospital, the hospital preserves its performance and the quality of its services thanks to the new graduates who join to its cadre.

The hospital , he asserted, has distinctive cadres including 70 faculty Physicians, 68 contractor doctors, 450 postgraduate students and 825 nurses, adding that there is a plan to rehabilitate and invest the central Ambulance hospital located besides the hospital to ease the heavy pressure on it. The latest data issued from the hospital shows that during the first six months of the current year the number of ambulance attendants reached at 64206 patients, the Outpatient clinics attendants amounted to 71216, the accepted patients hit 42306 and the patients of kidney dialysis reached at 1027. In addition to that, the number of those who treated by laser reached at 613 patients in addition to a total 7321 kidney dialysis sessions, 39196 Electrocardiograph cases , 21398 different ultrasound cases, 399 chemical sessions, 639810 laboratory analysis and 101088 radiography cases.

Al-Mouwasat University Hospital was founded in 1956 and it is mainly composed of 4 buildings, Administration Building, Emergency and Out-Patient Clinics Building and the Physician Residence Building, alongside those building there is the Cardiovascular Surgery Building.