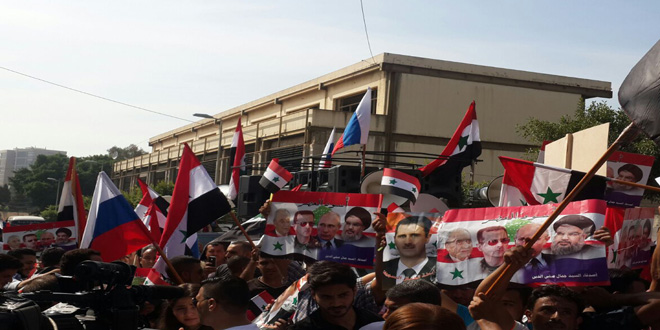 Capitals, SANA – Branches of the National Union of Syrian Students in several Arab and foreign countries staged on Sunday events outside the Russian embassies and consulates expressing appreciation for Russia’s support to Syria in its war against terrorism.

Held as part of a series of similar events carried out in cooperation with the Syrian embassies and the Syrian communities in a number of countries across the world, the stands aim at showing thanks and gratitude to Russia for its firm position in support of Syria and its direct involvement in the fight against terrorism in the country.

On September 30, the Russian Air Force, acting upon a Syrian request, started air strikes against terrorist positions in the Syrian territory, destroying dozens of field camps, ammunition depots and command centers for the terrorist organizations. Holding posters of President Bashar al-Assad and Russian President Vladimir Putin, the participants in Tehran event chanted slogans expressing heartfelt thanks to Russia and its leadership.

Head of Tehran branch of the Students Union, along with a group of students, handed the Russian Ambassador in Tehran Levan Dzhagaryan a letter of thanks in which they valued Russia’s “courageous stance” in support of the Syrian people and its “wise policy” and understanding of the growing threat of terrorism.

Ambassador Dzhagaryan, for his part, reaffirmed Russia’s unwavering support for the Syrian people and President al-Assad, stressing his country’s rejection of any foreign interference in the Syrian internal affairs. He pointed out that his country’s support for the Syrian legitimate government is in line with the international law and is aimed at fighting terrorism that has become a threat to the whole region and the world and not just Syria.

In Canberra, the Russian Consul Natalia Nefedova was handed a letter of appreciation from the Syrian students and representatives of Australian civil associations and parties taking part in the event.

The letter hailed Russia’s “serious” attitude in fighting terrorism and its principled supportive stance for the Arab issues, mainly the Palestinian Cause.

A gathering also took place outside the Russian Embassy in the Lebanese capital Beirut to show appreciation for the Russian support.

The participants in the gathering raised the Syrian, Russian and Palestinian flags and photos of President al-Assad and President Putin and of Hezbollah Secretary-General Sayyed Hassan Nasrallah. The Syrian students and community in Russia organized a stand where the participants gathered in the area extending from Leo Tolstoy Square in Moscow to the Headquarters of the Military Academy of the General Staff of the Russian Armed Forces.

Some of the banners raised in the event read “Together for fighting Terrorism” and “Thanks Putin” in the Russian and Arabic languages.

Russia, another participant said, has proved that it is “more courageous and more loyal than many of the Arabs who have let Syria down and conspired against it.”

In the same context, “Syria and Russia are allies, and they won’t lose the battle,” read the banners held by the participants in the event organized in Prague, the Czech capital.

The participants considered that the participation of the Russian Air Force in confronting terrorism side by side with the Syrian Arab Army has enhanced the steadfastness of Syria and effectively contributed to fighting terrorism and its supporters.

The effectiveness of the Russian airstrikes, they said, has unmasked the West’s false claims about fighting ISIS through the US-led coalition. Meanwhile, the Syrian students and community in India held a solidarity stand outside the Russian Embassy in New Delhi, where the participants observed a moment of silence in honor of the martyrs’ souls.

The acting Charge d’affairs of the Russian Embassy in New Delhi said Russia will continue its support to Syria in fighting terrorism, making clear that the Russian-Syrian cooperation defends the interests of the peoples of both countries.

In France, the Syrian community held a solidarity stand in Marseille City, called for by the Syrian-French Solidarity Association. Member of the Syrian Expatriates Forum in the World, Rima al-Jleifawi, said the event came to express the Syrians’ welcoming of Russia’s decision to engage in the fight against terrorism in Syria in support of the Syrian army.

She underlined the importance of such events particularly in light of the misleading practiced by Western media, including the French, to smear the Russian military operation in Syria. In the meantime, a delegation of the Syrian Students Union-Egypt branch- visited the headquarters of the Russian Embassy in Cairo, and handed a shield to the Second Secretary of the Embassy Maxim Rubin in appreciation of the Russian efforts against terrorism.

Hundreds of Syrian students and expatriates also expressed thanks to Russia in an event held outside the Russian Embassy in the Slovakian capital of Bratislava.

The event also saw the participation of representatives of the Slovak-Russian Friendship Association, the Leftist Youth Front and the Communist Party of Slovakia.

In Malaysia, the Syrian students and community participating in the event in front of the Russian Embassy in Kuala Lumpur described Russia’s supportive stance towards Syria and its decision to get involved in the fight against terrorism as a “heroic” position that “will make a historical shift.” The participants presented a souvenir and a letter of thanks and appreciation to the Russian Embassy as a token of their deep gratitude.

The Russian Embassy in Nicosia, the capital of Cyprus received a letter of thanks addressed to President Putin in appreciation of his “historic stance” towards the Syrian people.

Syrians in Algeria also expressed their deep thanks to Russia for its fight against the takfiri terrorism targeting Syria.

In Havana, members of the Syrian community and students in Cuba expressed high appreciation over Russia’s supportive stances towards Syria in combating terrorism.

Meeting Russian Ambassador in Havana, the Syrian community and students delegation stressed that the Russian recent step in supporting Syrian people in fighting terrorism has important strategic meanings on all levels as it aims at protecting the Syrian people against the terrorist conspiracy and war waged against their homeland.

The Russian Ambassador, in turn, stressed that his country will continue supporting Syria and offering all kinds of assistance, expressing confidence of its victory over terrorism.

On October 13th, thousands of Syrian citizens gathered in front of the Russian Embassy in Damascus in a similar gesture to express gratitude to Russia.