Over 100 terrorists killed in stepped-up crackdown, reconnaissance drone shot down 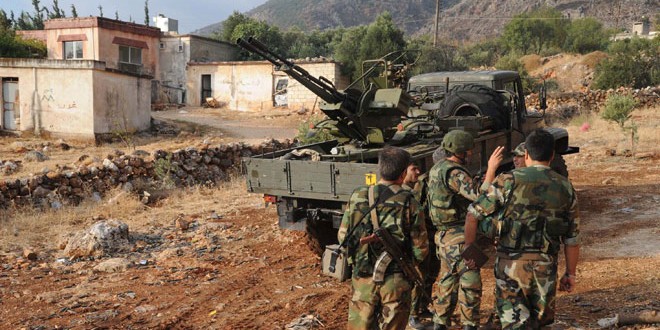 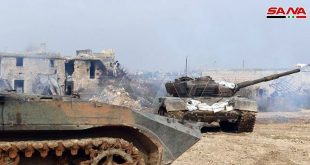 Provinces, SANA – Army operations continued on Friday in the framework of stepped-up crackdown on the terrorist organizations in various areas, particularly in Hama where the army is advancing, inflicting heavy losses upon the terrorists there.

The Syrian Arab Army established full control over town of al-Bahsa in the northwestern countryside of Hama province, a military source told SANA on Friday evening.

The source said that an army unit eliminated the last remnants of terrorists in the village, which is located at the outskirts of al-Ghab plain near the countryside of Idleb province, adding that the army is canvassing nearby areas.

5 vehicles, including one equipped with a 23mm machine gun, were destroyed, and 5 terrorists were killed and 12 others were injured during army operations in Kafr Zeita town, one of Jabhat al-Nusra terrorists’ most important strongholds in the province.

More terrorists were killed and over 30 others were injured in the army’s operations at the outskirts of Kafr Nabbouda in the province’s northern countryside. A leader of a terrorist group was identified among the dead.

Another army unit killed 30 terrorists and destroyed 3 of their vehicles to the north of Tallet al-Sayad, also in the northern countryside.

Meanwhile, the Syrian Air Force destroyed terrorists’ hideouts and vehicles in Kafr Nabbouda, al-Mansoura, and the surroundings of al-Mighir and Maarkabba in the province’s northern countryside and in al-Habbit village on the administrative lines with Idleb province.

These operations are part of a wide-scale military operation that the Syrian Arab Army began two days ago with the aim of eliminating terrorist organizations in the northern countryside of Hama province.

An army unit killed 50 terrorists who attempted to infiltrate towards al-Breij area in the eastern countryside of Aleppo province and destroyed a vehicle equipped with a heavy machine gun used by the terrorists.

Another army unit destroyed three vehicles, one of which equipped with a machinegun, in the vicinity of al-Nairab airport, 10km east of Aleppo city.

A number of terrorists were also killed in al-Zahraa neighborhood on the western sides of Aleppo city, including the two terrorists known as Abu Diab Juma’a and Abu Bakr al-Hreitani.

In the province’s eastern countryside, army operations targeted concentrations and fortifications of ISIS terrorists in al-Sab’een hill, al-Na’ameh hill, and in the villages of Jdaideh, al-Buqjiye, Huwaijineh, Qasir al-Ward, and al-Sheikh Ahmad, which resulted in destroying a number of vehicles, some of which were equipped with machineguns.

The Syrian Army’s air force launched strikes against dens and gatherings of ISIS in Deir Ezzor.

The airstrikes resulted in the destruction of many vehicles, killing many terrorists and injuring many others in al-Jafra and al-Mrei’iyeh in the southeast countryside of Deir Ezzor.

The Army’s airstrikes also targeted ISIS’ dens in al-Mayadeen city, destroying a den with all terrorists and weapons inside it.

Syrian Arab Army units targeted terrorists’ gatherings and hideouts in a number of areas in Daraa al-Balad neighborhood in Daraa city, killing and injuring scores of terrorists from Jabhat al-Nusra and destroying their weapons and equipment, a military source told SANA.

The source said that another unit left all members of a terrorist group dead or injured west of Atman town 5km north of Daraa city, while army operations against terrorist hideouts west of Kherbat Ghazala bridge in the northeastern countryside left many terrorists dead, injured others, and destroyed their weapons and munitions.

Meanwhile, several local sources reported identical information which said that Saudi Arabia has sent anti-armor and anti-air missiles through the Jordanian borders to a number of terrorist groups in Daraa, namely the terrorist groups of Jaish al-Yarmouk, al-Mothanna Movement, and Ahrar al-Cham.

Reconnaissance plane for terrorists shot down

An army unit shot down a reconnaissance drone for terrorists in Beit Hleibiyeh in the northern countryside of Lattakia.

The army’s air force killed a large number of terrorists in strikes on their hideouts and gatherings in Rabiaa area.

An army unit clashed with a terrorist group in al-Mreij district in Salma area, killing all of its members.

The Syrian Arab Army’s Air Force carried out a series of airstrikes targeting concentrations and movements of ISIS terrorists in the surroundings of al-Shaer field in the northwestern countryside of Palmyra (Tadmur) in Homs province, a military source told SANA.

An army unit destroyed three pickup trucks equipped with machineguns along with the Jabhat al-Nusra terrorists on board in Izz Eddin village on the administrative line between Homs and Hama provinces.

Another army unit killed a number of terrorists and destroyed their arms to the west of al-Msheirfeh village, 18 km north of Homs city.

In Talbiseh area north of Homs city, army units eliminated a number of terrorists and destroyed their weapons and equipment in a series of concentrated operations that targeted their hideouts and hotbeds in the villages of al-Sa’an al-Aswad, al-Sa’an al-Shamali, and al-Za’faraneh.

Another army unit killed a number of terrorists and destroyed their weapons west of al-Mashrafa village 18km northeast of Homs city.

A unit of the Syrian Arab Army carried out a precision operation targeting hideouts of Jabhat al-Nusra terrorists in the farms of Zibdin village in the south of the Eastern Ghouta area in Damascus Countryside.

Sources on the ground told SANA’s correspondent that the operation resulted in destroying an ammo depot for the terrorist organization and the elimination of several of its members including Mansour al-Barghouth, Mousa al-Hilo, Bashir al-Haffar, and Hayel al-Hussein.

A number of terrorists from Jaish al-Islam were killed in a series of strikes by the army targeting their positions in Harf al-Deeb hill, al-Samadi, and the quarries area in the farms west of Douma area. Sobhi Anees, Majed Qashou’a, Hassan Rashed, Kassem al-Da’as, and Omar Younes were identified among the dead.

Another army unit destroyed two cars along with the terrorists on board in operations targeting terrorists’ concentrations and movements in Tal Kurdi farms northeast of Douma. Mazen Ghazal, Abdelrazzaq al-Dali, Karim al-Farawati, and Adnan Dallo were identified among the dead. 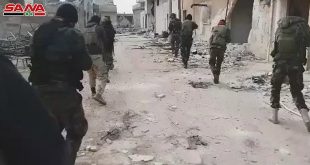