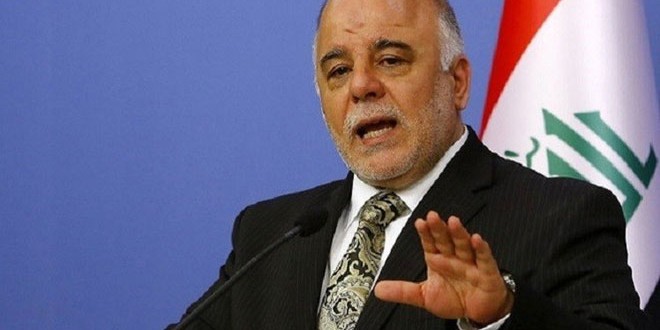 Baghdad, SANA – Iraqi Prime Minister Haider al-Abadi said that Iraq’s cooperation with Russia, Syria, and Iran in the field of counter-terrorism benefits all four countries, and that the four sides are currently exchanging security and intelligence data.

At a press conference held in Baghdad on Saturday, al-Abadi stressed the necessity of eliminating ISIS and other terrorists and finding a political solution for the crisis in Syria.

He also criticized the United States’ program for arming and equipping those it refers to as “moderate opposition” in Syria and allocating USD 500 million for this, noting that the fact that those individuals turned over their weapons and equipment to Jabhat al-Nusra proves Iraq’s viewpoint which says that terrorism benefits from those funds, adding that sending funds and providing more weapons and training increases destruction in Syria.

The Iraqi Premier said that the U.S.-led alliances airstrikes that are carried out in Syria without the Syrian state’s permission constitute a problem in terms of international law, adding that Iraq has no problem with the Russian Air Force carrying out airstrikes on ISIS sites in Iraq as long as it receives approval from the Iraqi government, and that all those who want to cooperate with Iraq to fight terrorism are welcome.

He called on the international community to work towards putting a stop to the funding of terrorists and their flow from across the world to Iraq and Syria.

Al-Abadi also denied that any foreign combat forces are active on the ground in Iraq, save for a very small number of consultants and training personnel, adding that there is no agreement to have foreign ground forces in Iraq in the future.