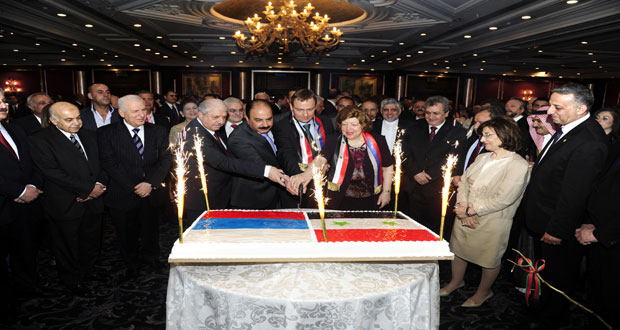 Damascus, SANA – Vladimir Geltov, the Minister Plenipotentiary at the Russian Embassy in Damascus, asserted that Russia and Syria share the same position with regard to building a multi-polar world taking into consideration the principles of respecting other countries’ sovereignty and not interfering in their affairs.

Geltov’s remarks came during a ceremony celebrating Russia’s National Day that was held by the Russian Embassy at Dama Rose hotel on Thursday.

Syria, he said, is victim to a large-scale intervention by foreign countries, which has resulted in destroying the Syrian economic and social infrastructure that was established during the last decades with noticeable participation and contribution from the Soviet Union and Federal Russia.

Russia believes that the “internal Syrian dispute” wouldn’t be solved except through a comprehensive Syrian-Syrian dialogue and without external dictations, expressing his country’s readiness to contribute to accomplishing initiatives aimed at pushing forward the political process on the basis of Geneva Communiqué of June 30th, 2012, Geltov added.

The Minister Plenipotentiary pointed out that his country also believes that adopting a comprehensive method according to the international legitimacy is the only way to encounter the terror threats, not only in Syria but also in the entire Middle East region.

Presidential Political and Media Advisor Bouthaina Shaaban, for her part, said that Russia, by supporting Syria, stands on the side of justice, and is providing an example unlike that of the international Imperialism and the western approach that is based on commitment to the international legitimacy.

Deputy Foreign and Expatriates Minister Fayssal Mikdad said that the Syrians’ participation in this anniversary asserts the strategic relations between Damascus and Moscow, which have been further enhanced during the past period.

He added that the coming days will see these relations getting deeper and more developed to the effect of fighting the common battle against terrorism.

Regional Secretary of al-Baath Arab Socialist Party, a number of ministers, MPs and representatives of accredited Arab and foreign diplomatic missions in Damascus attended the celebration.