Al-Moallem: Turkey committing hostile acts in Syria much worse than their statements 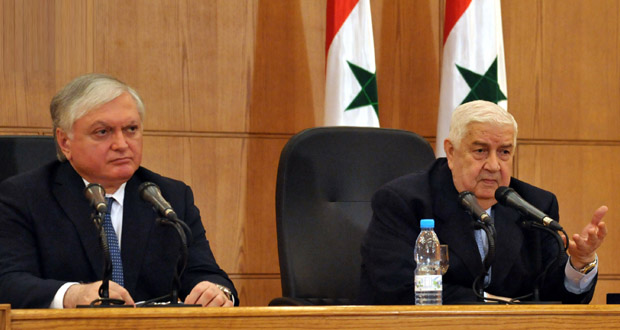 At the conference, al-Moallem said that Minister Nalbandian held constructive talks with President Bashar al-Assad and at the Foreign and Expatriates Ministry, tackling various issues and bilateral relations, asserting that the two sides’ viewpoints were in agreement regarding the issues that were discussed and regarding the need to boost bilateral relations and the importance of combating terrorism in Syria.

He affirmed that Syria and Armenia share strong bonds that are reinforced by the presence of Armenian Syrians who are also Armenian citizens. “If the international community had imposed the necessary punishment to the butchers who committed the massacres against Armenians in the early 20th century, then their descendants today in Turkey wouldn’t have dared to commit massacres via their pawns in Syria,” al-Moallem said, adding “the question now is: what will the international community do to the new butchers?”

For his part, Nalbandian said that his visit to Syria comes at a difficult time for the Syrian people, voicing grave concern over the continuing conflicts, the humanitarian crisis, and the large numbers of victims and the disasters caused by terrorist crimes in the country.

The Minister said that the talks he held tackled resolving the crisis in Syria and the efforts being exerted to that effect, adding “we are convinced that the crisis can only be overcome and peace can only be achieved by ending violence and initiating constructive dialogue between all sides involved in a manner that takes into consideration the interests of all Syrians.”

He noted that since the crisis in Syria began, Armenia talked in several international forums about the need to prevent supporting terrorists and the need to find an immediate solution for the situation in the Middle East, and particularly in Syria, adding that Armenia will continue working to bring attention to these issues in international circles.

Nalbandian also said that his visit to Syria in 2015 has a symbolic significance, because 100 years ago, the Ottoman Empire committed genocide against 1.5 million Armenians, with the Syrian desert ending up being the final stop for hundreds of thousands of victims of that genocide, and back then the Syrians reached out to the surviving Armenians and aided them, so for those survivors Syria became their sanctuary and second home.

He said that the fact that the perpetrators of the genocide went unpunished resulted in new crimes, as evidenced by the heinous crimes and atrocities being committed by terrorists today which forced millions of Syrians – among them tens of thousands of Armenians – to become displaced once more.

The Minister said that even the Armenian Genocide Martyrs’ Memorial Church in Deir Ezzor, which housed the remains of genocide victims, wasn’t safe from the barbaric crimes of extremists, forming a symbolic link between the crimes against humanity of the past and of the present.

Nalbandian asserted that the condition of civilians in Syria, including Armenians and other minorities, is an issue of great and constant concern for his country, thanking the Syrian authorities for the care they have shown for Armenians and their cultural heritage.

In response to questions by journalists, al-Moallem addressed the recent statement by the Turkish Foreign Minister on the existence of a preliminary Turkish-U.S. agreement to provide air support to terrorists, saying that Turkey is committing hostile acts in Syria that are much worse than that statement.

“He knows that the use of Syrian airspace by non-Syrian planes is by definition an aggression, therefore the Syrian Arab Republic has the right to use all the available resources to repel this aggression,” the Minister said, adding that the new thing about this statement is that Turkey is acknowledging its hostile intent, and that this statement is part of the current media warfare being waged on Syria.

Al-Moallem asserted that relations between Syria and Russia and Iran are much stronger than some may believe, and that Russia and Iran haven’t hesitated to provide support to Syria.

In response to another question, al-Moallem said “if we had been waiting for the international community to punish those criminals, then we wouldn’t have offered so many martyrs. We didn’t wait, and we probably won’t wait as long as we have willpower and hope in victory and as long as we feel that our people support our armed forces to achieve this victory.”

The Minister noted that Syria had never counted on the alliance airstrikes, noting that the alliance was active when it was trying to prevent ISIS from taking over Ayn al-Arab, which was good, but afterwards the alliance seemed to dissipate, as if there is a secret alliance between it and ISIS, adding that what happened in Palmyra also happened in al-Anbar in Iraq, and that those who are counting on this alliance are delusional.

Commenting on the latest statements by the French Foreign Minister that raised concerns about possible partition in Syria and Iraq unless an international action is taken, al-Moallem said that the terrorist offensive against Palmyra, Idleb and Jisr al-Shughour is the result of the French support for terrorists which, he said, should stop if “they really care.”

The Syrian people are capable of preventing partition of their own country, al-Moallem affirmed.

“In my capacity as Foreign Minister, I’d like to say that Syria’s relation with Russia and the Islamic Republic of Iran is much deeper than some give credit for,” he said in reply to a question about Syria’s allies.

He described the friends’ support for Syria as “clear and tangible”.

He added that “no sensible man” would support ISIS or Jabhat al-Nusra ascension to power unless he is “spiteful,” pointing to an observable change in the West’s stances on Syria while those “spiteful” countries such as Saudi Arabia, Jordan, Qatar and Turkey stick adamantly to their conspiratorial role against Syria.

He said that the Turkish and European public opinion which is increasingly opposing the hostile policies against Syria offer grounds for optimism.

The Syrian and Iraqi armies are facing “a common adversary” that ISIS represents, al-Moallem said when asked about the Syrian-Iraqi military coordination. But, he added, this coordination still falls short of the threat facing the two countries.

Asked about Iran’s agreement with P5+1 group on its nuclear program, the minister said that Syria supports the agreement as it serves the interests of the Iranian people and hopes Iran will assume a greater role on the international arena after the current negotiations end.

On turkey’s justification about genocide against Armenians, Nalbandian said the justifications are only present in Turkey, wondering how, after one hundred years, “We avoid genocides if we didn’t name what has happened and put it in its legal framework which is collective genocide”.

“Turkey is the only side that criticizes what is going on, summons ambassadors, criticizes organizations and parliaments and faces the international community to deny those crimes,” Nalbandian added.

He affirmed that there were statements issued from Germany and Austria where they underlined their participation, at that time, in the crime, saying “in front of such statements, we are surprised how the responsible side about the crime denies its responsibility.” 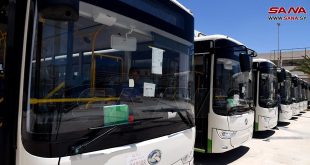