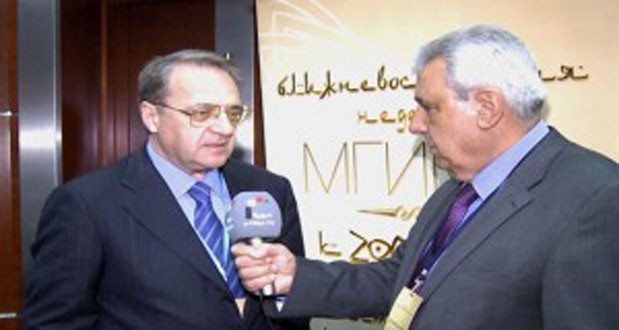 Moscow, SANA – Special Representative of the Russian President for the Middle East and Africa, Deputy Foreign Minister Mikhail Bogdanov, said that the historical Russian-Syrian relations are based on mutual trust and shared sentiments between the people of the two countries.

In an interview given to SANA’s correspondent in Moscow on Tuesday, Bogdanov said that these relations aren’t limited to politics but also cover the fields of economy, investments, and culture, in addition to supporting Syria in difficult times and during wars and crises.

He said that bilateral relations are developing well despite the difficult circumstances in Syria, asserting that Russia wants to help Syrians overcome their ordeal as soon as possible via political dialogue, asserting that Russia’s leadership and people believe that there can be no military solution for the crisis in Syria.

On the U.S. and western attitude towards the crisis in Syria, Bogdanov said that Russia only assumes responsibility for its own position, and it opposes any attempts to impose political dictations on the Syrians, stressing that the first Geneva communiqué constitutes international agreement on basis for resolving the crisis via negotiations and talks, not through military action.

He also said that Russia is willing to host as many inter-Syrian talks as needed if the Syrian sides request such a thing, voicing hope that the efforts of UN Special Envoy on Syria Staffan de Mistura and the meetings he is currently conducting in Geneva will be successful, noting that Russia is participating in these meeting and is staying in touch with de Mistura and his deputy in Geneva.