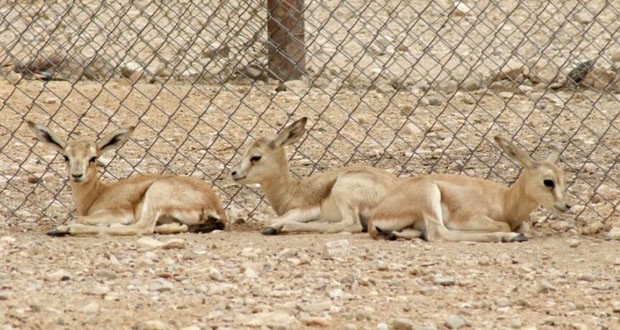 Palmyra, SANA – As part of their projects for preserving and developing wildlife in the Syria Badiya desert, which makes up around 50% of the overall area of Syria, the General Establishment for the Management, Development and Protection of Badiye has been working to preserve rhim gazelles and Arabian oryx. Rhim gazelles and Arabian oryx (a medium sized antelope) used to live in large numbers in the Badiya desert until quite recently, and therefore protecting these two species is of vital importance, which also goes for several other species native to the area like ostriches, ibises, and plovers.

Director General of the Establishment told SANA that they are working to preserve all indigenous wildlife forms in the Badiya, and that the numbers of newborn rhim gazelles and Arabian oryx for the current season has increased, with five newborn gazelles and seven newborn oryx, adding that the Establishment also achieved success in artificially hatching ostrich eggs, with a new batch of eggs due to hatch within the next few days.

He said that a team of veterinarians and specialists are supervising the gazelle and oryx herds and documenting all the work done in that regard.