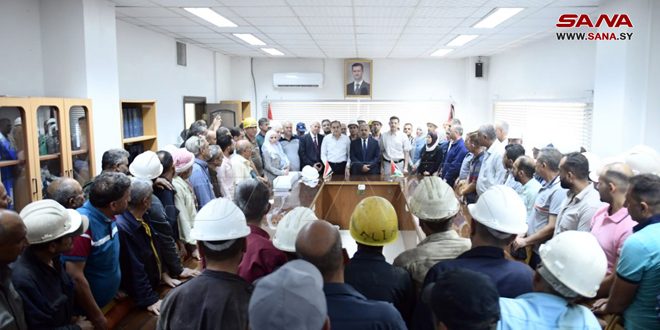 Aleppo, SANA- Upon directives of President Bashar al-Assad, Minister of Electricity Eng. Ghassan al-Zamel honored the workers of the Thermal Plant in Aleppo.

Eng. Al-Zamel said that President al-Assad directed to allocate financial reward for all the workers in the Thermal Plant in Aleppo, including the engineers, technicians, administrative cadres and workers, as they deserve appreciation and love for their sincere efforts to re-operate the “fifth electricity generation group”, those whom His Excellency had described as the “sons of the Field”, hailing the role of the national expertise in the reconstruction and rebuilding process. The Minister reiterated that the re-operation of the Thermal Plant in Aleppo constitutes an important and strong message and a challenge in the face of terrorism.

The workers, in turns, expressed their gratitude and pleasure for the President’s generous gesture, expressing their intention to continue their work and increase their productivity.