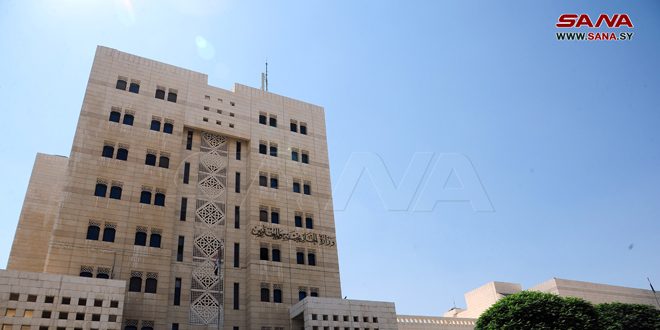 Damascus-SANA-Syria affirmed that what the Turkish regime’s endeavour to establish the so-called “safe zone” is an aggressive colonial act through which the Recep Tayyip Erdogan’s regime seeks to create an explosible area inside Syria and continue to sponsor, arm and operate armed terrorist organizations to be used against the Syrian people.

Pointing out that any measures taken by this regime on the Syrian territories is null and void with no legal or realistic effect, and even amounts to be described as war crimes and crimes against humanity.

The Ministry of Foreign Affairs and Expatriates said in a letter to both the Secretary-General of the United Nations and the President of the Security Council regarding the aggressive practices and the dangerous declarations recently issued by Turkish officials, led by the Recep Tayyip Erdogan, regarding the establishment of a so-called “safe zone” northern Syria and the Turkish occupation forces’ intention to establish colonies and to launch military action deep inside Syrian territories to impose these illegal measures: the aggression occupation and demographic cleansing are the only legal and realistic description that applies to the illegal Turkish presence on Syrian territory.

The Ministry stressed that Syria retains its right to take all necessary measures stipulated in the charter and international law in order to end the aggressive, occupation and ethnic cleansing practices perpetrated by the Turkish regime.

The Foreign Ministry said that what the Turkish regime is doing through his seeking to establish a so-called “safe zone” on Syrian territory is an aggressive and a colonial activity act of through which the government of Recep Tayyip Erdogan seeks to establish an explosible area inside Syria and to continue sponsoring, arming and operating armed terrorist organizations to be used against the Syrian people in order to serve the extremist agenda adopted by the Turkish regime, which has poses great and grave danger to regional and international peace and security.

The Foreign Ministry stressed that any measures or activities perpetrated by the Turkish regime on the Syrian territory, foremost of which is its implementation of ethnic cleansing policy in the occupied Syrian territories, are null and void with no legal or realistic effect, and even amount to be described them as war crimes and crimes against humanity as they are based on aggression, occupation, ethnic and social cleansing practices, expelling and displacing indigenous people, seizing their properties, homes and lands, and threatening their lives and future.

The Ministry stressed that Syria’s sovereignty, independence, safety and territorial integrity should not be a blackmail and negotiation card between a radical political regime that rules Turkey and threatens regional and international peace and security, and the colonial NATO, which seeks, irresponsibly, to expand the circle of conflict to extend to this region of the world.

The Foreign Ministry warned the governments of the countries taking part in this dangerous Turkish project, as well as individuals and non-governmental and international organizations, of the legal consequences resulting from engaging in financing projects and programs implemented by the Turkish occupation government on the occupied Syrian territories, and stressed that Syria retain the right to take all the necessary legal measures to ensure accountability, prosecution and compensation derived from the practices perpetrated by the Turkish side and every occupying power and every party cooperating with them in implementing, facilitating and financing the practices of aggression against public and private property in the occupied Syrian territories.

It also warned the agents of the US occupation in the north-east of the country against giving any fake excuses to the Turkish regime to justify its colonial policies and schemes in Syria.

The Ministry concluded its letter by calling on the UN and Member States to pursue this dangerous issue with all seriousness and not to remain silent on the extrationary practices of the Turkish regimen, and demanded the Secretary General of the UN to consider the dangerous impact of these practices on his endeavors and those of his Special Envoy. 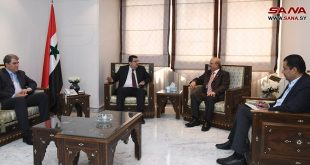