President al-Assad: Russia does not only defend itself, but it defends the world and humanity 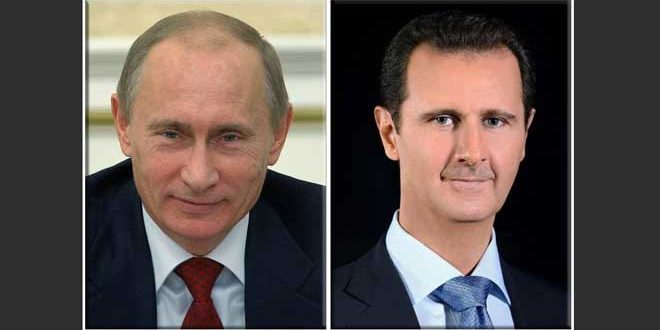 Talk during the phone call dealt with the situation in Ukraine, and the special military operation carried out by the Russian Federation to protect civilians in Donbas region.

President al-Assad stressed that what is taking place today is a correction to history and re- balance to the world that it has lost after the dissolution of the Soviet Union, adding that Western hysteria comes to keep history in the wrong place in favor of the chaos that only be sought by the outlawed.

The president considered that Russia today doesn’t only defend itself, but it defends the world and principles of justice and humanity.

President al-Assad said that Western countries bear responsibility for chaos and bloodshed as a result of their policies aimed at controlling peoples as these countries use their dirty methods to support terrorists in Syria and the Nazis in Ukraine and in various parts of the world.

The president stressed that Syria supports the Russian Federation, based on its conviction of its right stance that repelling NATO expansion is Russia’s right, because it has become a global threat to the world and has turned into a tool to achieve the irresponsible policies of Western countries that seek to strike stability in the world.

President al-Assad considered that the Syrian and Russian armies are confronting one enemy; in Syria it is extremism and in Ukraine it is Nazism, pointing out that the Russian Federation will give a lesson to the world that the superpowers are not great with their military strength only, but with respect for the law, high morals and humanitarian principles.

For his part, President Putin stressed that the special military operation in Donbas aims to restore stability and stop the suffering of the people there during the last eight years.

He added that his country has been depending on negotiations and diplomacy during the past years and the decision to use force was taken only after the Ukrainian authorities, backed by their Western masters, announced their non-compliance with the agreements ratified by the parliaments of the two countries, and after the Donetsk and Luhansk republics submitted a request for military support, stressing that the Russian soldiers will achieve all the aspired goals. 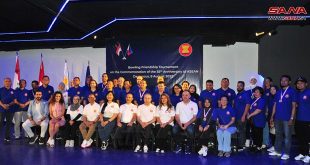