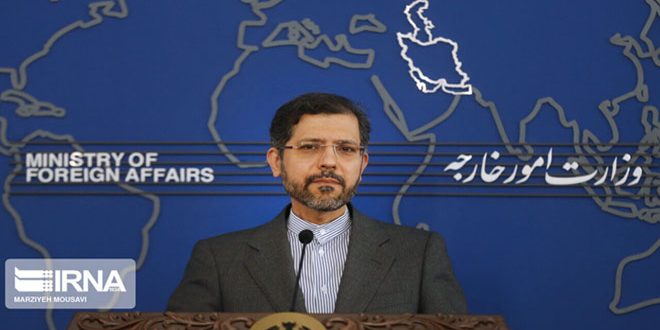 Tehran, SANA- The relations between Iran and Syria are close and characterized by their strategic depth, Iran’s Foreign Ministry spokesman Saeed Khatibzadeh said, affirming that Iran will move forward with firm steps in preserving Syria’s territorial integrity, independence and sovereignty.

In his weekly press conference on Monday, Khatibzadeh denounced the repeated Zionist attacks on Syrian territory and sovereignty, stressing that the hostile countries should correct their mistakes and stop attacking the Syrian people.

He called on all countries to respect Syria’s national sovereignty. He also called on Western countries that impose unilateral coercive economic measures on Syria to lift and end them.

In another context, Khatibzadeh said that a large part of the points of disagreement were resolved during the eighth round of the Vienna talks on reviving the nuclear agreement.

He considered that resolving the points that are still outstanding requires a political decision on the part of America, as the US government bears responsibility for its country’s policies.

He noted that Tehran welcomes any solution that comes from within the region, provided respect for the sovereignty of countries is observed.

Regarding the visit of Iranian President Ibrahim Raisi to Russia, Khatibzadeh said that the Iranian Foreign Ministry will send a delegation to Russia to prepare for the visit, shedding light on the importance of this visit, which aims to strengthen relations between the two countries in all fields.

He added that the strategic agreement between Iran and China focuses on upgrading the level of relations between the two countries and touches on economic, cultural, political, parliamentary and judicial dimensions.