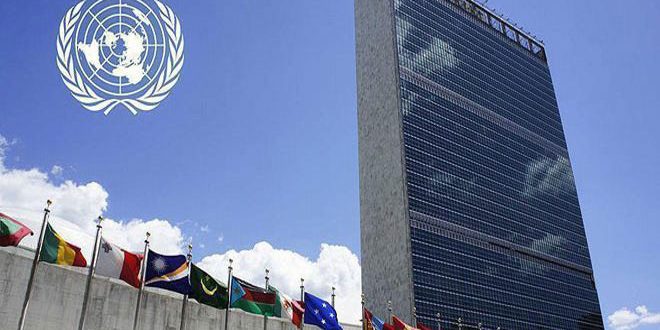 New York, SANA- The United Nations General Assembly has renewed the adoption of a resolution by a majority of member states calling on the Israeli occupation entity to fully withdraw from the occupied Syrian Golan to the line of June 4, 1967, in implementation of the relevant Security Council resolutions.

The General Assembly resolution states that the decision of “Israel” on December 14, 1981 to impose its laws and jurisdiction on the occupied Syrian Golan is null and void and has no legitimacy whatsoever, as confirmed by the Security Council in its resolution No. 497 of 1981 and demands “Israel” to cancel it and to fully withdraw from the occupied Syrian Golan till the line of June 4, 1967, in implementation of the relevant Security Council resolutions.

The resolution stresses that all provisions related to the regulations attached to the Hague Convention of 1907 and the Geneva Convention relative to the Protection of Civilian Persons in Time of War of August 12, 1949, still apply to the Syrian territory occupied by “Israel” since 1967.

Syria’s Permanent Representative to the United Nations, Bassam Sabbagh, said in a statement that the General Assembly, in the resolutions it adopts annually for more than five decades, has been calling on “Israel”, the occupying power, to end its occupation of the Syrian Golan, and it has been asserting that any measures taken by “Israel” to impose its laws and jurisdiction over it are illegal, void and null and have no legal effect. Sabbagh added that the rightful position of the General Assembly which is consistent with the principles and purposes of the Charter of the international organization was confirmed by the Security Council in its Resolution No. 497, which also rejects the Israeli occupation decision to “annex” the occupied Syrian Golan and considers it null and void and has no legal effect.

He noted that Israel’s intransigence, and its refusal to comply with the relevant Security Council and General Assembly resolutions confirms the unacceptable state of inability of the United Nations to compel Israel to end its occupation of the Syrian Golan, due to the protection umbrella provided to this entity by the United States and other countries and their unlimited support.

Sabbagh added that Israel’s continued defiance of the resolutions of international legitimacy and the failure to put an end to the United Nations’ inability to implement its resolutions constitute a real obstacle to establishing security and stability in the region and encourage the occupation to continue its aggressive practices.

Sabbagh reiterated Syria’s firm adherence to its right to restore the entire occupied Syrian Golan up to the line of June 4, 1967, which is an alienable right that is not subject to negotiation or concession.

He stressed Syria’s firm and principled stance in support of the Palestinian people’s right to self-determination, the establishment of their independent state with Jerusalem as its capital, and the guarantee of the refugees’ right to return to their homes in accordance with international law and United Nations resolutions.

2021-12-02
ruaa-jazaeri
Share
Previous A roadmap for a knowledge-based economy in Syria
Next 97 new coronavirus cases recorded, 6 fatalities in Syria