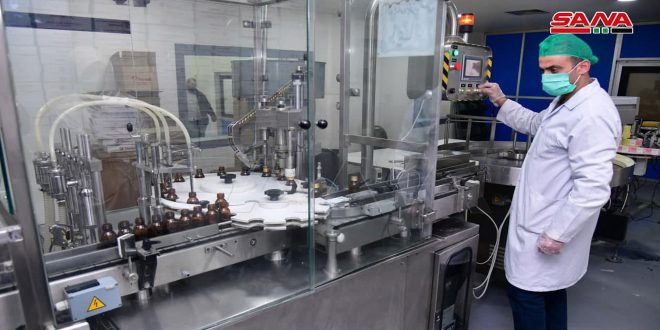 Damascus, SANA- The sales of the Arab Company for Pharmaceutical Industry “Tamiko” of medicines during the first nine months of this year exceeded SYP 12.3 billion with an increase of 216 percent in comparison with the same period last year.

Meanwhile, the production value reached more than SYP 12.6 billion with an increase of 232 percent.

The implementation rate of the production plan was estimated at 171 percent, and it included more than 50 pharmaceutical products of various pharmaceutical forms, including 39,000 capsules and more than 94,000 tablets, according to the company’s marketing and production report.

Regarding the production of antibiotics, the general manager of the company, Dr. Fidaa Ali, said in a statement to SANA that there are large and sufficient stocks in the company of pharmaceutical groups used as antibiotics, including capsules, syrups and tablets,

“There is no shortage of production quantities or the raw materials needed for antibiotics production,” Ali said.

The company seeks to establish a line for the production of ointments, but the unjust siege imposed on the country and its economic repercussions have led to the reluctance of suppliers to sign long-term contracts with the company.

2021-10-25
ruaa-jazaeri
Share
Previous Do you know that Queen Elizabeth wedding dress was made of Damask brocade fabric?
Next 293 new coronavirus cases, 12 fatalities recorded