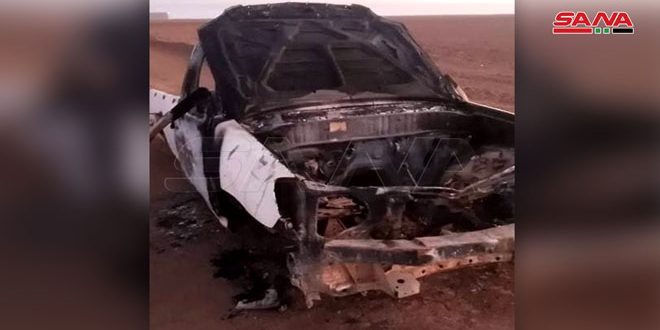 Hasaka, SANA- Two gunmen affiliated to the US occupation-backed QSD militia were killed and others were injured in an attack carried out by the popular factions targeting their vehicle near the silos of Tal Alou in al-Yarubiyah sub-district in Hasaka eastern countryside.

Local sources told SANA reporter that the popular factions targeted a military vehicle belonging to QSD militia near the silos of Tal Alou near Umm Kahif village in al-Yarubiyah sub-district, killing two gunmen and injuring others.

A number of QSD militants were killed and others were injured in current October after the popular factions targeted their den in al-Malkiya area in the far northeastern countryside of Hasaka.

2021-10-20
nisreen
Share
Previous Two young men martyred by fire of QSD militia in Deir Ezzor countryside
Next Syria will continue to fight terrorism on its territory till eradicating it completely, Sousan says