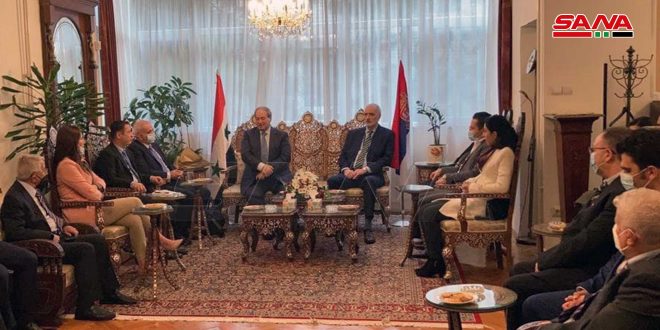 Belgrade, SANA-Foreign and Expatriates Minister, Faysal Mikdad, called on members of Syrian community in Serbia to invest in their homeland, particularly following the issuance of the new investment law.

He hailed efforts exerted by the community members in Serbia for their support to homeland during the hard conditions it has passed through , stressing the leadership’s keenness to adopt  measures that secure and guarantee the voluntary and decent return of the refugees and displaced ones.

The Minister also called on the community members to intensify their efforts to uncover the unilateral coercive measures that badly affected the Syrians and destroyed their infrastructure.

For their part, the community members appreciated the sacrifices offered by Syrian Arab Army in the war on terrorism, and the efforts excreted by the Syrian government to secure the basic needs of the Syrian citizens along with its interest in the expatriates’ affairs.