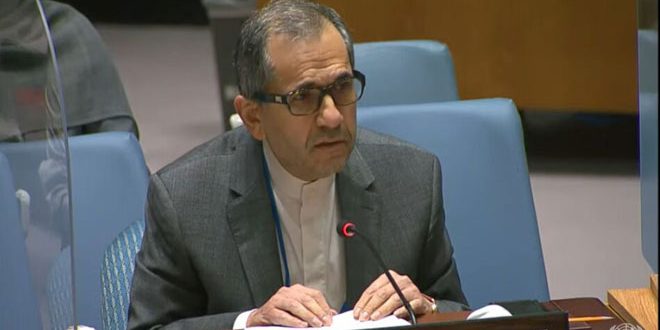 New York, SANA- The international community and the Security Council should carry out their responsibilities and compel the Israeli entity to immediately end its attacks on Syria’s sovereignty and territorial integrity, Iran’s Ambassador and Permanent Representative to the United Nations, Majid Takht Ravanchi said.

“These attacks and provocative practices represent an outrageous violation of international rights and they endanger regional and international peace and security,” Iranian news agency IRNA quoted Takht Ravanchi as saying during a Security Council session.

“Work must be done to end the occupation of parts of Syria by foreign countries,” Takht Ravanchi said.

He noted that all foreign forces not invited by the Syrian government must leave this country without delay and without any preconditions.

He stressed the need to need to continue fighting all terrorist groups, because their presence and the continuation of their criminal practices threaten the security of Syria and its territorial integrity, as well as the peace and security in the region.

All illegal separatist schemes in Syria and attempts to support them are rejected, Takht Ravanchi said, stressing full respect by all parties to Syria’s sovereignty and unity.

He underlined the need to start and assist in the reconstruction of Syria and the return of refugees to it in parallel because they reinforce each other, adding that this matter requires de-politicizing humanitarian aid and implementing Resolution 2585, upon which the UN Security Council requested all member states to take practical steps to meet the immediate needs of the Syrian people.

Takht Ravanchi reiterated Iran’s principled stance which is based on solving the crisis in Syria politically and in accordance with the principles of international laws, especially the respect for sovereignty and territorial integrity of states and non-interference in their internal or foreign affairs.

He called for lifting the illegal unilateral coercive measures against Syria, which are one of the main reasons for the bad living conditions of the Syrian people