US occupation loots Syrian oil, bring it out towards Iraqi territories 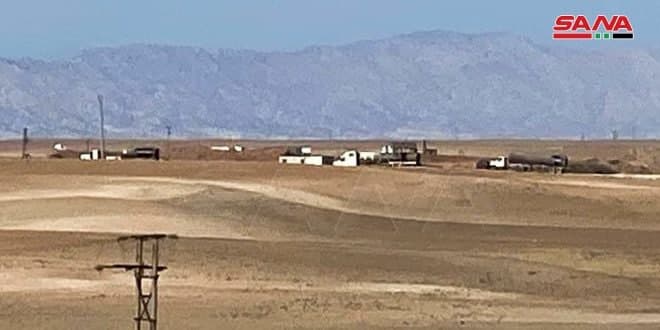 Hasaka, SANA- US occupation forces brought out a convoy of trucks and tankers loaded with stolen Syrian oil from Hasaka countryside to Iraqi lands.

Local sources in al-Suwaydiyah village in the countryside of al -Yarubiyah told SANA reporter that the US occupation forces took out a convoy of 42 vehicles of tanks filled with stolen oil, tankers, trucks and a number of refrigerators via illegal al-Waleed crossing into Iraqi territories.

Last Friday, the US occupation forces brought out a convoy of 55 vehicles, including tankers loaded with stolen Syrian oil towards Iraqi territory through the illegal al-Waleed crossing.

2021-08-18
Manar
Share
Previous A number of the wounded arrive from Iraq, Russia to participate in” Wounded of Homeland” Sports Games
Next  Citizens of Abu Ghadeer village in Hasaka confront QSD militants who tried to kidnap a number of young men