QSD militia abducts a number of citizens in Hasaka countryside 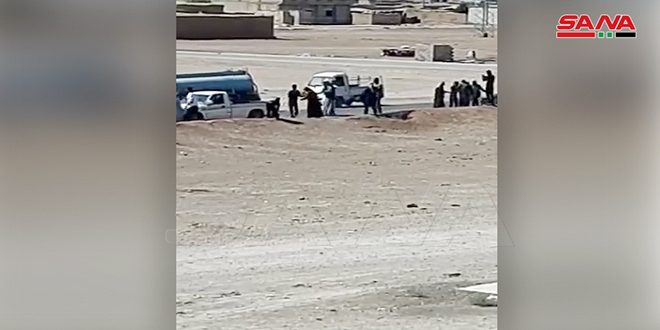 Hasaka, SANA- US-backed QSD militia has kidnapped a number of citizens in Tell Hamis area in the south of Qamishli city in Hasaka northeastern countryside.

Local sources told SANA reporter that a group of QSD militia gunmen on Tuesday morning attacked a number of citizens in several areas in Tell Hamis , and abducted a number of them taking them to unknown destinations under the pretext of participating in the recent demonstrations in the area , which demanded the expulsion of the QSD militia from their areas.

In August 1st, the locals in Tell Hamis attacked a convoy for US occupation troops, and threw it with stones, calling for the expulsion of occupation forces and their agents from all Syrian territories.

The sources noted that tens of locals in tell Hamis have staged various demonstrations in several areas of the town, in a protest against kidnapping a number of Young men by QSD militia to force them fight with its ranks.

2021-08-10
rafah
Share
Previous Fire severity index to continue in forests north west Syria from Wednesday tomorrow until next Friday
Next President Bashar al-Assad issues Decree no.208 for the year 2021 on forming the new Syrian cabinet, chaired by Eng. Hussein Arnous