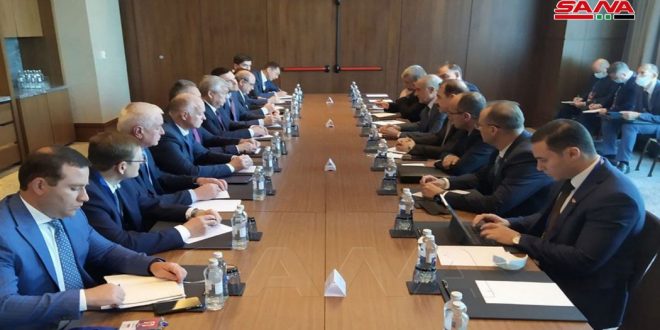 Nur Sultan, SANA- Syrian Arab Republic delegation, headed by Dr. Ayman Susan, Assistant Minister of Foreign Affairs and Expatriates held a meeting with Russian delegation, headed by Russian President’s Special Envoy to Syria, Alexander Lavrentiev in the framework of the 16th international meeting in Astana format which has opened its activities in the Kazakh capital Nur Sultan on Wednesday. The two sides reviewed the items scheduled on the agenda of the current meeting, the developments in Syria and the Western policies which seek to the continuation of the war on Syria regardless to the suffering of the Syrian people, in addition to looting the natural resources by the US occupation forces.

Both sides expressed determination to continue the joint work until the withdrawal of the US forces and other foreign forces illegitimately exist in the Syrian lands.

The meeting touched upon the situation in Idleb and the violations committed by the terrorist organizations existed there and their crimes against the locals, in addition to the humanitarian situation in Syria, as the Syrian side stressed that the measures that the Turkish occupation forces have taken and their continued support to the terrorists in the region are the main cause of their continued crimes. The two sides also expressed determination to continue work on various domains and activating the work during the upcoming stage in light of the developments that the countries of the region and the world are witnessing.