Syria participates in high-level virtual dialogue on desertification and drought 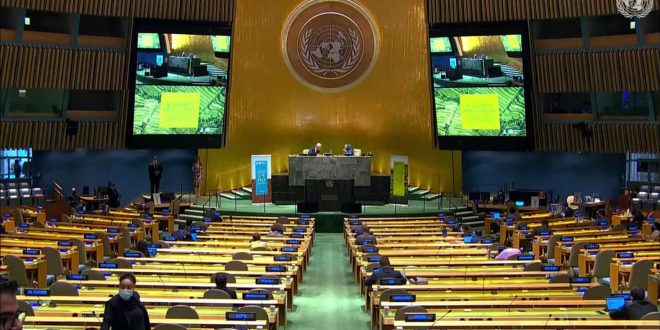 Damascus, SANA-With the participation of Syria, the United Nations General Assembly held a high-level virtual dialogue on desertification, land degradation and drought at the United Nations headquarters in New York to assess the progress made in this field and global efforts to revive and restore lands, in the presence of ministers and sides concerned in agriculture, representatives of governments, international institutions and international organizations.

The dialogue, which was held on Tuesday  aims to focus the attention of the international community on land issues, encourage all member states to adopt and implement LDN (Land Degradation Neutrality )targets and national drought plans, and encourage countries, the private sector to participate and support the Land Degradation Neutrality Fund and exchange experiences, best practices, advanced technologies and innovative business models that Promote green, resilient and inclusive recovery strategies.

In a video-recorded speech  broadcast during the dialogue, Minister of Local Administration and Environment, Hussein Makhlouf, affirmed that the Syrian government is looking forward with interest to the course of this dialogue and its results, hoping environmental cooperation between countries, especially in our region would be enhanced.

Minister Makhlouf said that forests, reserves and agricultural fields in Syria came under many terrorist attacks, which led to a significant deterioration in these systems and an increase in the pollution of Syrian al- Badia soil, particularly  in the areas of random  refining of oil stolen by armed terrorist groups and their  practices and those supporting them from the countries negatively affected the implementation of plans and projects to combat desertification and rehabilitate degraded pastures at a time when the environmental situation in Syria needs international cooperation and support to confront these environmental challenges over the last  ten years.