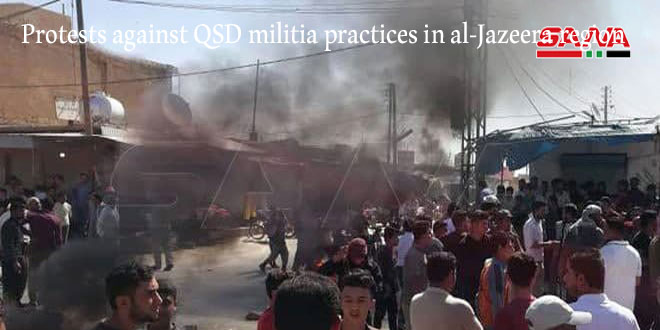 Hasaka, SANA- Two civilians were injured as the US occupation-backed QSD militia opened fire on them in the vicinity of al-Dirbasyia town in Hasaka northern countryside.

Local sources told SANA that QSD militants opened fire at a gathering of civilians between the towns of Amouda and al-Dirbasyia near the Turkish borders, as two civilians were injured while state of panic that prevailed among the locals.

The areas which are under the control of the QSD militia have been witnessing continued popular demonstrations which demand to expel the militia from the region after it has gone far in its criminal practices against the locals, in addition to plundering their property and the national wealth in the Syrian al-Jazeera region, besieging a number of the villages and towns and kidnapping young men.