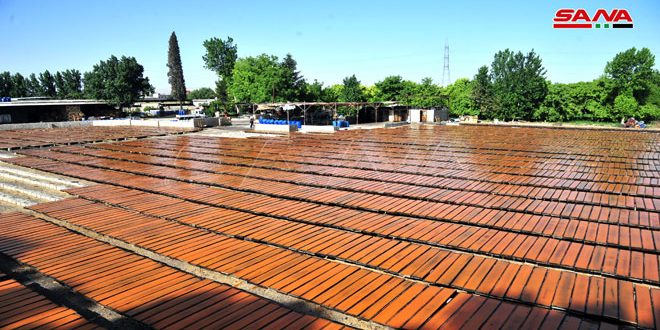 Damascus, SANA –  “Qamar al-Din “ is unique Syrian drink made of dried apricot paste where the production process begins in the 6th month every year after harvesting the apricot fruit. Qamar al-Din is a distinguished product throughout hundreds of years.has a high nutritional and medical value with a delicious taste as It is a very popular drink for breaking the fast in the month of Ramadan.

Several versions have been proposed for the origin of Qamar al-din’s name, one version holds that it was named for its inventor, and other version holds that apricot season coincided with the sighting of the new moon marking the beginning of Ramadan in the year ,but it is certain that its name came from al-Cham, the original home of its production since hundreds of years and has been connected with culture of its people at that time.

Qamar al-Din industry, is regularly eaten as a drink and sometimes as a dessert, has spread in other countries, but Syrian Qamar al-Din, is made in Damascus and its countryside and is still the best, where a groups of variety of apricot trees grow in Syria ،which is the most suitable for making Qamar al-Din particularly in Ghouta Damascus as well as the appropriate climate where its industry needs. Eng. Muhammad Gawish , an owner of facility for making Qamar al-Din in Shabaa town in Damascus countryside told SANA about stages of production, which begin with receiving the best freshly-picked apricots from farmers, and using a machine to wash them with water to purify the fruits from stuck leaves and sticks, and remove the damaged ones.

“The apricots are sorted in boxes according to specific weights, then they are transferred to evaporation room for a period exceeding 24 hours after sterilizing it with material so that the fruits are ready for juice,” Jawesh added.

The seeds are removed during the manufacturing of Qamar al-Din are dried then pulverized to separate the kernel from the hard shell, and the kernels are exported as they are used to make various products.

All the previous stages have been completed due to the very experienced hands that follow up the production stage step by step.