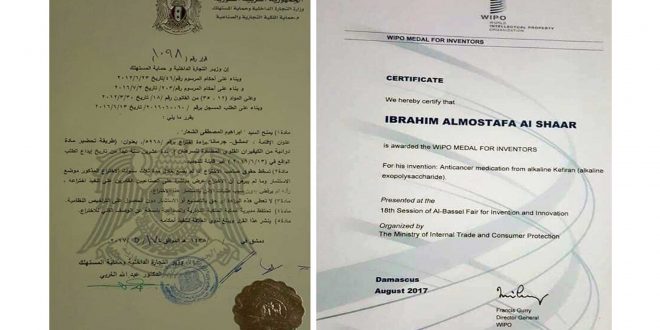 Damascus, SANA- Syrian researcher Ibrahim al-Shaar has announced that he was the first to invent the principle of the so-called “sugar bomb” to deceive cancer cells by inventing “alkaline kefiran” substance and its mechanism of action.

A team of British scientists announced a few days ago the invention of what they called a “sugar bomb” that can destroy cancer cells in the human body within a few seconds. It is based on the principle that these cells grow quickly and need more food, so they devour the “bomb” that contains the drug.

Researcher, Dr. al-Shaar, gained a patent registered in Syria in 2017, and in the World Intellectual Property Organization “WIPO” and the approval of the Syrian Ministry of Health in 2016 for his invention of a medicinal substance from the anti-cancer “alkaline kefiran” and its mechanism of action.

Dr. al-Shaar, in a statement to SANA, said that a cancer cell consumes twenty times more sugar than a healthy one. This leads to an increase in sialic acids that cover the surface of the tumor and suppress the immune cell, raising the acidity of the medium and decreasing the oxygen within it, thus forming barriers that disrupt the work of the immune system, and the tumor grows and invades the body.

The invention of Dr. al-Shaar is based on injecting kefiran, a multi-sugar of exogenous origin, with sodium bicarbonate under the skin to deceive the malicious cell into eating it on the principle of the Trojan horse by exploiting the high ability of cancer cells to attract and devour sugar “kefiran that contains alkaline substance”, which will lead to the cessation of its activity and its destruction.

Hence, as mentioned by Dr. al-Shaar, the alkaline kefiran was used in sarcoma tumors that affect bones and soft tissues to remove the acid medium, destroy the inactivation barriers, and use energy to supply cells with oxygen and kill them from the inside.

The researcher referred to the role of alkaline kefiran in supporting healthy body cells and strengthening the immune system, as it targets special receptors on the surface of the cancerous cell and destroys them without harming the healthy cells.