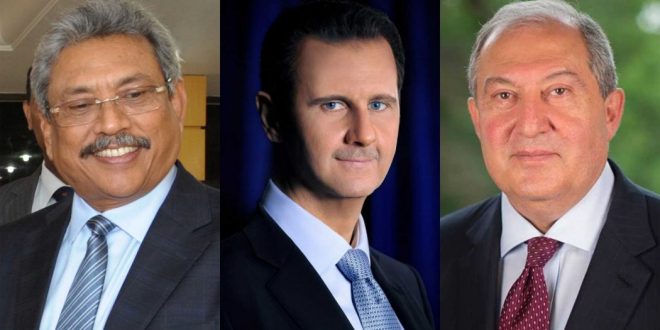 Damascus, SANA-President Bashar al-Assad received two cables of congratulation from President of Armenia, Armen Sargsyan, and the President of Sri Lanka, Gotabaya Rajapaksa, on occasion of winning the presidential election.

President of Armenia said in the cable “I extend my sincere congratulations on occasion of re-electing you as a President of the Syrian Arab Republic.”

“I am confident that the Armenian –Syrian relations, based on mutual respect and cooperation would be enhanced and developed in the interest and service of the two brotherly peoples”, President Sargsyan added, voicing his best wishes of success for President al-Assad and the peace and prosperity for the Syrian people.

For his part, President of Sri Lanka said in the cable “I would like to send you my sincere congratulations and best wishes on occasion of re-electing you as a President of the Syrian Arab Republic.. Your country has faced unprecedented war, and re-electing you is an opportunity to contribute to reconstruction process and resilience and leading Syria to a stable, advanced and prosperous future.”

President Rajapaksa asserted that Sri Lanka and Syria have warm bilateral relations and that the ties of friendship between them would deepen in the joint benefit of the two peoples during the upcoming years.

In a similar cable, Acting Prime Minister of Armenia, Nikol Pashinyan, said that the warm and friendly Armenian –Syrian relations will deepen and boost through the joint efforts for the benefits of the two brotherly peoples, expressing his best wishes to President al-Assad and prosperity and peace for the Syrian people.