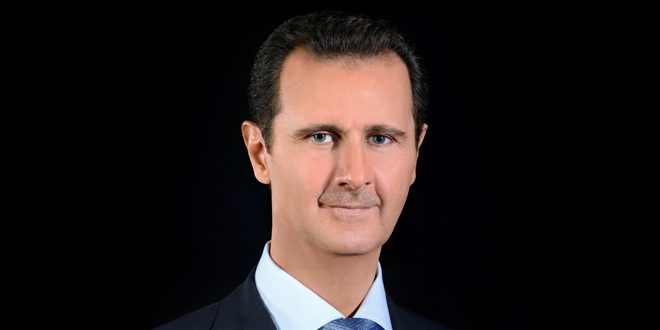 Putin expressed confidence that the continued development of relations between Russia and Syria at various domains would meet the interests of the two friendly peoples, wishing health and success to President al-Assad and a peaceful and successful life to all Syrians.

The Belarus President expressed his congratulations to the President al-Assad and the Syrian people on Evacuation Day, affirming his country’s readiness to help Syria in reconstruction process.

He said that the brotherly Syrian people will soon overcome consequences of foreign interference, and will be able to make a major step in the process of reconstruction .

For his part, President Rouhani wished the Syrian people more progress and success.

Rouhani hoped bilateral relations would be boosted in all domains and valuable steps would be taken to prevail peace and stability in the region as well as establishing regional cooperation through investing all capabilities available in both countries.

His majesty, the King of Malaysia, Sultan Abdullah Ri’ayatuddin al-Mustafa Billah Shah, extended the king and the Queen’s congratulations to the government and people of Syria, on the occasion of Evacuation Day, wishing security, stability and prosperity would return to the country.

His majesty affirmed that Syria and Malaysia still enjoy warm and friendly relations since the establishment of diplomatic relations between them in 1958, hoping that these relations would be boosted in the interests of peoples in both countries.

President Aslan Bzhania also expressed his confidence that cooperation between the two countries and the Abkhaz and Syrian peoples, who are unite by long-term ties of friendship based on mutual trust and common values, will continue to develop actively.

President  al-Assad also received a cable of congratulation from Palestinian President Mahmoud Abbas on the occasion of Evacuation Day.

In his cable President Abbas expressed, on behalf of the Palestinian people and on his own behalf, congratulations to President al-Assad and to the Syrian people on the Evacuation Day.

President Abbas expressed appreciation over the Syrian people’s sacrifices in defending their homeland.

He hoped that the standing relations between the two countries would develop, wishing good and prosperity to Syria and to the Syrian people.