Five civilians martyred, 6 others, among them two kids, injured in Turkish occupation attack on villages in Aleppo countryside 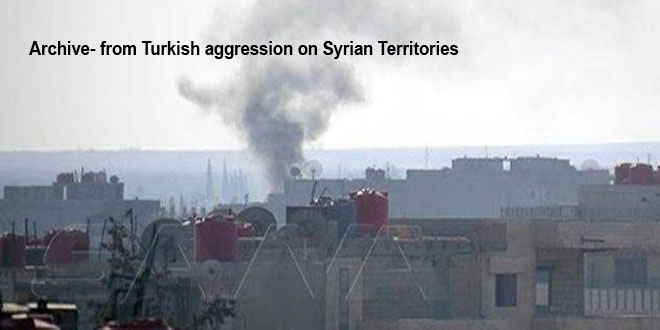 Aleppo, SANA- Five civilians were martyred, 6 others injured, among them two kids, when Turkish occupation forces and their mercenaries of terrorist organizations fired tens of rocket and artillery shells against the residential areas in the vicinity of Tal Rifaat and Afrin in Aleppo northern countryside.

Local sources told SANA that the Turkish occupation and its mercenaries fired about 200 artillery and rocket shells on the civilians’ houses in the vicinity of Tal Rifaat and Afrin areas, asserting that the attack also affected the villages of Abyan, Jalbl, Deir Jamal, Kashtaar, Kafr Naya and Sheikh Hilal in Aleppo northern countryside.

The sources added that 5 civilians were martyred and 6 others, among them two children, were injured in addition to causing material damages to the properties of locals, the infrastructure and the public facilities.

It is noteworthy that since its aggression on the Syrian territories, Turkish occupation and its mercenaries repeatedly attack the neighboring areas and villages with rocket shells.