US occupation continues to plunder Syrian wheat, takes out 10 trucks from Tal Alou silos in Hasaka to north of Iraq 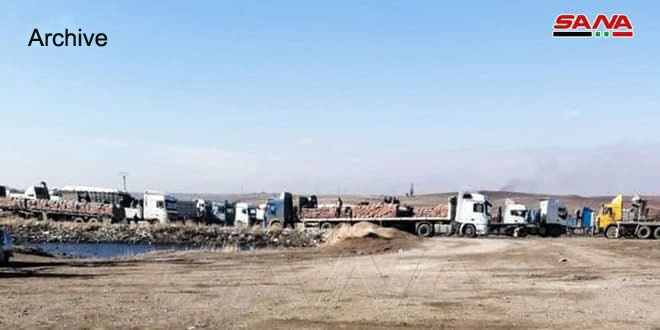 Hasaka, SANA -The US occupation forces have stolen new quantities of wheat via its trucks from Tal Alou silos in Hasaka eastern countryside.

Local sources in al-Yarubiya countryside told SANA reporter that ten of trucks loaded with wheat from silos of Tal Alou village started to consecutively leave on Saturday afternoon towards the illegitimate al-Walid border crossing, guarded by armed groups affiliated to QSD militia, to smuggle it to the north of Iraq.

During the past two weeks, the US occupation forces have stolen large quantities of wheat from the silos of Tal Alou through more than 112 trucks and sent them to northern Iraq.

2021-03-13
hybah
Share
Previous Az-Zerba town teems with life following a year of its liberation from terrorism
Next Two citizens martyred, three children injured in blast of mines left behind by terrorists in several villages, Hama countryside