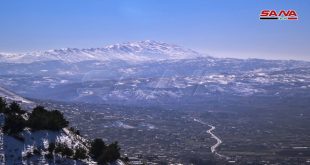 Damascus, SANA- Temperatures will rise to become around average or slightly higher as the country is affected by a low air pressure in all layers of the atmosphere.

Meteorology Department expected in its Sunday bulletin that the skies will be partly cloudy in general with an opportunity for showers in separate areas, and the weather will become stable gradually in the afternoon and in the evening, while the weather will be cold at night, warning against frost over the mountains, and fog in Damascus Ghouta and in the central and al-Qalamoun regions.