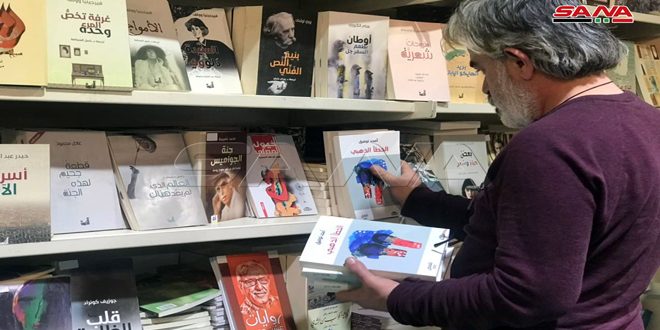 In a statement the SANA correspondent in Baghdad, the Syrian publishers expressed their happiness over their participation in this cultural event and the Iraqi citizens’ turnout to have a look at different books in the Syrian pavilion, including literary, historical, political, philosophical, scientific, economic and other books.

Iyad Hassan, General Director of Dar Al-Farqad, said that the Syrian publishing houses have proven their presence on the Arab arena through the quality of their publications and their interest in subjects of all kinds, whether they are children’s books, study or intellectual books required at the level of the Arab world.

For his part, Dr. Majd Haidar, director of Ward Publishing House, said that Damascus and Baghdad are twins and that the Syrian culture is largely present in Baghdad, indicating that  this exhibition is one of the most successful Arab exhibitions.

Iraqi novelist and storyteller, Kazem Hasouni, pointed out to the wide and remarkable Syrian participation in the exhibition with its high-end publications, at a time when Syria confronts a fierce terrorist war.