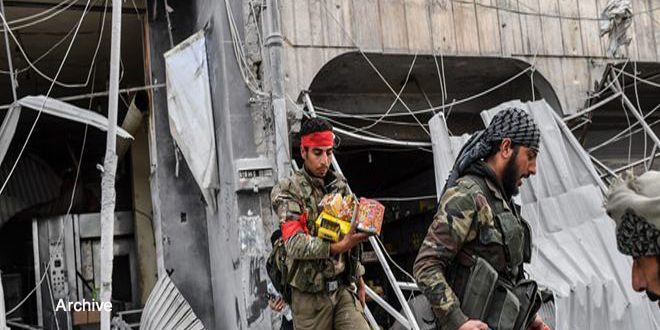 Hasaka, SANA_ As part of their continued criminal practices against civilians, the Pro-Turkish mercenaries on Wednesday set fire to a number of citizens’ homes in Abu Rasin area in the northern countryside of Hasaka.

Local sources told SANA reporter that the Turkish occupation mercenaries from the terrorist organizations burned a number of houses in Bab Al-Faraj village in Abu Rasin district, north of Hasaka, after they stole their contents, including furniture, electrical appliances, and other possessions.

The sources indicated that the terrorist organizations, ordered by the Turkish regime, have been practicing the most heinous crimes and  harassing people to expel them from their villages and resettle their families in their place, in a step aimed at changing the demographic structure in the region.

On Monday, the Turkish occupation mercenaries, stole furniture, metal equipment and copper collectibles in addition to electrical appliances from St. Touma Church in the churches neighborhood of Ras Al-Ayn to smuggle them abroad under Turkish regime’s cover.