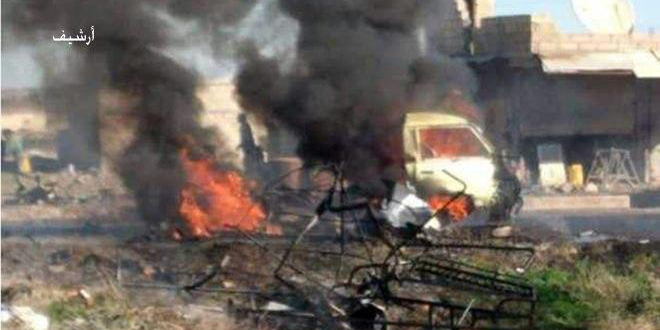 Aleppo, SANA- Five terrorists of Turkish regime mercenaries, including a leader, were killed in a car bomb blast in al-Bab city in Aleppo northeastern countryside on Tuesday.

Local sources told SANA reporter that a car bomb went off in al-Bab city near Qabasen crossroads in the city outskirts, killing five terrorists, including a leader from the terrorist groups, and injured about 18 persons, including civilians, and causing huge damage to cars and the adjacent buildings.

The sources added that groups of the Turkish occupation forces and their mercenaries had spread in the area and cordoned off the vicinity of the explosion.

On November 7, an explosive device planted in a car went off in al-Bab City, killing 3 mercenaries of the Turkish regime, in addition to causing material damage to the properties.