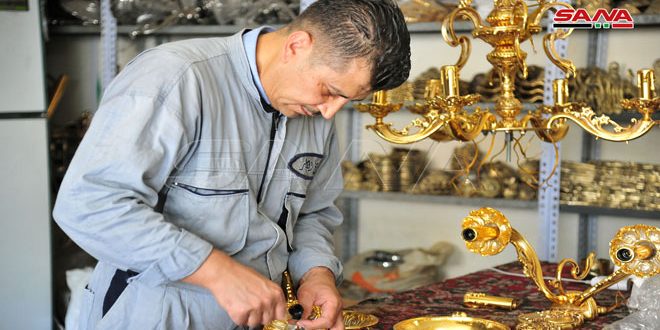 Damascus, SANA_ Chandeliers industry in Damascus dates back to more than a hundred years. The skill of the craftsmen working in it and their proficiency in this industry reflects their keenness to satisfy the tastes of its holders as a masterpiece that shows harmony and heritage in designs. This industry highlights the spirit and civilization of Syria. The skilled craftsmen managed  to develop this industry and merge the nobility of the past with development by merging shells and copper for the first time inside a copper chandelier to be  a masterpiece created by the sheikhs of al-Kar.

The skilled Syrian craftsman created the first copper chandelier inlaid with seashell to prove that this heritage profession is liable for changing and development and that he is capable of creativity, keeping pace up with the spirit of the times and using his techniques to develop heritage.

A soft and tender metal, with these words, Sheikh Al-Kar Adnan Tanbakji described the copper metal that accompanied him throughout his career in the ancient chandeliers industry dating back more than  hundred years. The date of the craft of making copper chandeliers is relatively recent compared to other old crafts, according to Tanbakji, but this enabled it to benefit from the decorations and special icons of those crafts.

In addition to that the incubator enabled them to create new crafts and models, such as the merging that Tanbekji made with Muhammad Kajk (Sheikh Kar in traditional handicrafts), where together they placed seashells to copper chandeliers in a work that takes place for the first time in Syria and was well received by people.

With developing the craft , lacquer material was added to form layer insulate copper from air and increase in its age in addition to inlaid the piece with desired color solution which gives it more of radiance and beauty according to Tanbekkji .

The lacquer material was added to form a layer that isolates the copper from the air and increases its lifespan, in addition to covering the piece with the required color liquid giving it more brilliance and beauty, according to Tanbekji.

Tanbekji believed that participation in internal and external exhibitions is one of the important factors that help Sheikh Al-Kar in continuity and development. He indicated that Syria has always had a distinguished presence in exhibitions, as it won first place on behalf of Syria in several exhibitions, including Beirut, Moscow and Algeria, in addition to being honored in Abkhazia.

Despite the technical development and the fierce competition between the automatic and manual industry, the Syrian heritage handicrafts still have a distinguished place in the whole world, according to Tanbekji.

He indicated that his presence in the central Damer incubator for traditional crafts will enable him to teach this profession to generations of young people in order to preserve and develop it.