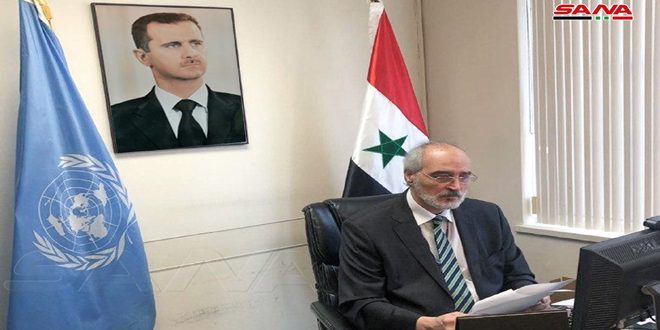 New York, SANA- Syrian’s permanent representative to the UN, Dr. Bashar al-Jaafari, said  that the Western states which impose coercive economic measures against Syria will not be able to cover the repercussions of their economic  terrorism against the Syrian people, indicating that that their allegations on humanitarian keenness will not hide the truth of their crimes which aim at putting further pressures on the Syrian State and hampering the reconstruction process and the return of the displaced Syrians.

Al-Jaafari, in a speech during a Security Council session via video conference about the humanitarian situation in Syria, accused the representatives of some western countries of telling lie which is clearly demonstrated in their allegations regarding the unilateral coercive measures which they are illegitimately and illegally imposing on Syria are not targeting the Syrian people and that they are exerting huge efforts to provide humanitarian and medical exemptions from these measures to extend assistance to the Syrians and that the Syrian government deprives its citizens who are infected with coronavirus from treatment.

Al-Jaafari added that Syrian citizens are suffering of the disastrous effects of Western coercive measures that threaten the simplest details of their daily lives and limit the ability of Syrian state’s institutions to provide services to its citizens and to improve their humanitarian situation and living conditions.

He said the representatives of the Western countries are working to institutionalize lying and to turn it into an approach for their misleading and sabotaging policies.

He also clarified that targeting the Syrian people by economic terrorism is not new, but it is the result of the narrow vision of US administrations that care for and serve Israeli interests on the expense of the stability and security of the entire region.

“Since 1978, the US successive administrations have imposed coercive measures on the Syrian economy and its vital sectors, such as civil aviation, petroleum, energy, telecommunications, technology, banking, import and the export, including the import and manufacturing of food, medicines and basic medical equipment, to dissuade Syria from its stances in rejection of the hegemony and occupation policies,” he said.

Al-Jaafari reiterated the need of ending the Turkish occupation of the lands in northern and northwestern Syria and the necessity of ending the crimes of Erdogan’s regime who support terrorism which have catastrophic repercussions of deteriorating the humanitarian situation of the Syrians.

He also stressed the need for ending the US occupation of the areas northeast of Syria and al-Tanf area, holding the US occupation and its allies and separatist militias and terrorist groups affialited to it, responsible for prolonging the period of the people’s suffering in al-Hawl and al-Rukban camps.

At the conclusion of his speech, al-Jaafari alluded to the report which was recently published by the British newspaper of “The Guardian” and which quotes research centers and academics in the United States, saying that since 2001 the United States, under the slogan of the so-called “war on terrorism”, have displaced 37 million persons from countries like Iraq, Afghanistan, Syria, Libya, Yemen and others, wondering who is creating crises in this case .