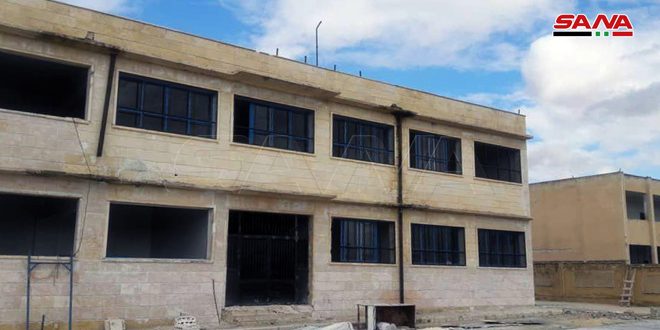 Hama, SANA- The General Company for Building and Construction, Hama branch started the rehabilitation works in 6 schools that have been sabotaged by the terrorist attacks in Idleb southern countryside with a total cost estimated at SYP 144 million.

Director of the Company’s Branch Ghiyath Ajmiyeh told SANA in a statement that the rehabilitation works include restoring the building of the schools, re-fixing the doors, windows, sanitation facilities and electricity, water and sewage networks.

Ajmiyeh indicated that the schools include schools of Tal Maraq, Tal Fakhar, al-Wasita alGharbiya, Abu Dali, al-Hamadaniyeh, Binin and Abu al-Duhour, adding that the company will contract with Idleb Education Department to rehabilitate the building of the school health department in Khan Sheikhoun city with a cost of SYP 13 million.

He stressed that the rehabilitation works aimed at stabilizing the educational process, accelerating the return of the students to their schools in the areas that the Syrian Arab Army have liberated and restored security and stability to them after defeating terrorism from them.