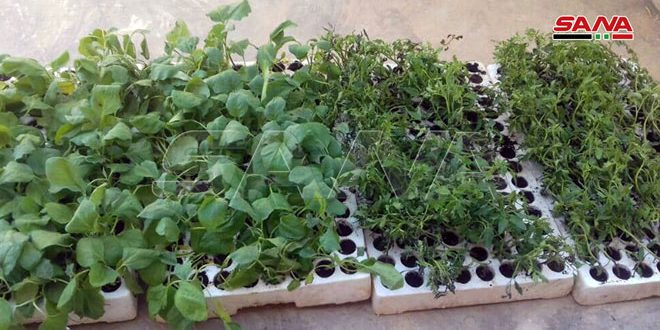 Damascus, SANA- Home gardens project aims at improving the level of the income of the rural families, reinvesting the agricultural lands, in addition to manufacturing the surplus agricultural production.

The project, which is carried out by the World Food Program and the Federation of Syrian Chambers of Agriculture, in cooperation with the Ministry of Agriculture and Agrarian Reform, consists of the summer and winter seasons, in addition to food processing units and poultry farming.

Chairman of Damascus Chamber of Agriculture Omar al-Shalet told SANA that the project was kicked off in 2017 in 6 areas in Damascus Countryside, among them Yabroud, Rankous, Qatana, as a first phase as the number of the beneficiaries of the project reached 685, while the second phase has included al-Zabadani area, Madaya and Bu’kin, while the third phase has included the Ghota after liberating it from the terrorist gangs, asserting that the number of the beneficiaries from the three phases reached 2800.

The fourth phase has included 1880 rural families in the eastern Ghota, al-Nashabiyeh area and part of Douma, with a 500 family for each area whom they will be provided with all component of the project.

Regarding the food processing unit, al-Shalet pointed out that it aims at manufacturing the surplus of the home garden production to be sold in the local markets in a way that ensure an income of the families.

He indicated that the number of the units reached 16 units which serve 80 families.

Regarding poultry farming, Shalet said that 300 families were chosen for the project as they were supplied with the equipment to carry out the project.

The project is one of the micro-agricultural projects which contributes to achieving self-sufficiency for the targeted families of summer and winter vegetables and eggs and providing a source of income for the beneficiary families through selling their production in the local markets.