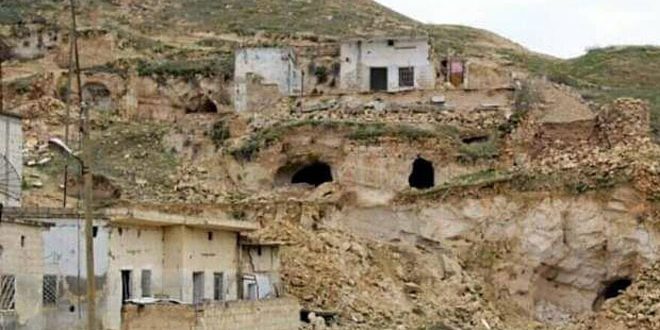 Hama, SANA – Al-Latamneh village, located in the north of Hama province, is one of the most unique historical and archeological sites in the world, as it chronicled first presence of the early and middle Stone Age humans.

Foreign and Syrian excavation missions have found during several excavations in the village a skeleton, bones, fossil remains, and a flint fragment dating back to one million years BC, the epoch which the archeologists call the Pleistocene era (between 3 million years and 10,000 years BC). Researcher Naser Flehan affirmed that al-Latamneh is considered one of the most important and rare sites of its kind in the world; as its river bed of the Orontes river yielded the remains of human camp well-preserved within layers from sand and alluvial that the river had deposited.

Flehan pointed out that the human camp had been inhabited for a short time by small group of humans who were gatherers of wild fruits such as hawthorn, almonds, and pistachio, and hunters of wild animal such as horses, deer and rhinos. He noted that this group lived in the Orontes basin about half a million years ago and their tools consisted of axes, cleavers, and scrapers, and they built their cottages from stones and branches, using fire for warmth, light, protection, and cooking.

On the other side, al-Latamneh village is adjacent to Khattab village as well as Qarmashy site where the studies were conducted by the Syrian missions in the 1960s and published in Syrian archaeological journals, and many researchers have written about these sites in terms of the first human settlement areas which date back to 600,000-200,000 BC.

The last mission that excavated in the area was a Syrian-German mission working from 2004 to 2009, and it discovered that human settlement took place around 400,000 and 200,000 BC.