National stand in Zibaneh village in Hasaka, in condemnation of coercive measures on Syria 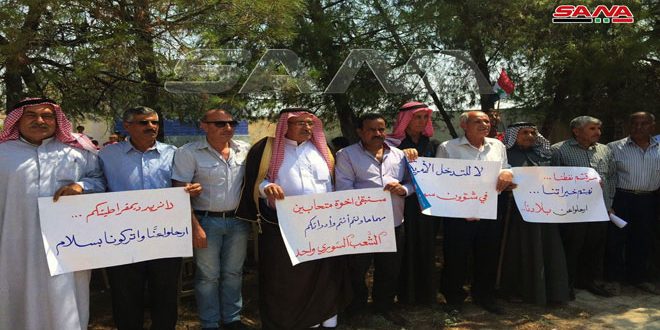 Hasaka, SANA- Locals in Zibaneh village in al-Qamishli organized a national stand in condemnation of the coercive economic measures imposed on Syria, especially the so-called “Caesar Act”, and in rejection of the presence of the US and Turkish occupation forces.

The participants in the stand raised banners condemning the systematic operations of pillaging the Syrian oil and other resources of the country by the US and Turkish occupation forces, and demanding to expel them and putting an end to the practices of the groups affiliated to them which work on spreading chaos and instability in al-Jazeera region.

In a statement to SANA reporter, Mayor of Zibaneh Village Adnan Mansour al-Amiri, affirmed condemnation of the so-called “Caesar Act” which targets the livelihood of the Syrian people with the aim to undermine their resilience and their standing by their army and leadership.

Al-Amiri expressed rejection of all forms of conspiracies aimed at sabotaging Syria and weakening its role in confronting the colonial projects in the region.

From his part, citizen Fathi al-Malla pointed out that the Syrian people will not change their firm stances which reject the presence of the US occupation on Syrian territory.

“We will expel them from our land no matter how long this will take, and we will stay loyal to our army, leader and homeland,” he said.

Participants in the stand affirmed that the presence of the US and Turkish occupation is the main reason behind undermining the security and stability in the region as the chaos serves the occupiers and allows them to continue to pillage and steal Syria’s resources and to tighten the siege on it economically, with the aim of punishing the people for their firm national stand.