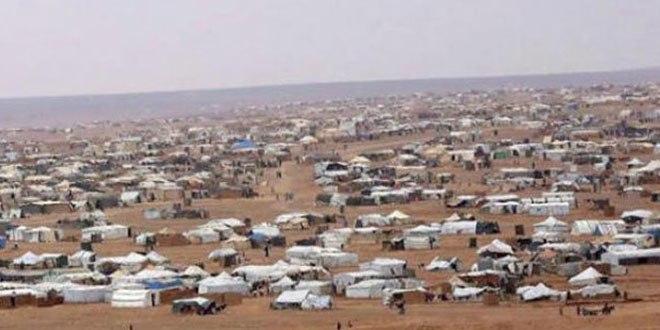 Moscow, SANA- Syrian and Russian Coordination bodies on the return of Syrian Refugees have renewed that the US continues to impede the delivery of humanitarian aid to displaced Syrians in al-Rukban camp, which is occupied by the US occupation forces, amid the outbreak of the Covid-19 pandemic.

The two bodies, in a joint statement on Friday, demanded guaranteeing a safe and unconditional exit for those who wish to leave the camp to their permanent places of residence and ending the occupation of at-Tanf area.

The statement noted that the only obstacle to dismantling al-Rukban camp and the return of displaced persons to their areas of residence is the false US position that alleges commitment to internationally recognized human values and public freedoms, but at the same time does nothing to respect them.

The United States, according to the statement, shows no serious position to solve the problem of the refugees in the camp, and at the same time provides everything necessary for its terrorist groups in that region.

The statement emphasized the failure of all attempts to cooperate with the American side and the lack of confidence in Washington, while Syria and Russia are making greater efforts to urgently get rid of the al-Rukban camp.

The illegal presence of the Americans and their allies on Syrian soil continues to be the main obstacle to guaranteeing a good state of health for the citizens in the light of the outbreak of Covid-19 pandemic, the statement said.

American and European behavior in Syria confirms the intentions of Western countries to obstruct efforts used to provide humanitarian aid with the consent of the Syrian government, the statement concluded.