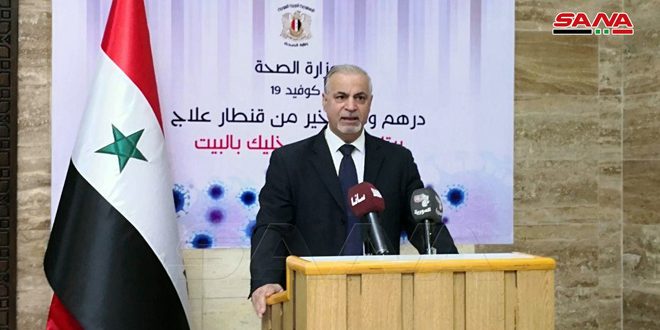 Damascus, SANA_ The Ministry of Health affirmed the continuation of preventive measures aimed at dealing with the Covid-19 pandemic and stressed that it closely follows the results of the gradual easing of precautionary measures applied in various sectors.

In parallel, the public health sector continues to provide adequate medical care to patients despite difficulties resulting from coercive unilateral economic measures imposed on Syria, which are undermining the capacity and response of the health sector.

The Ministry, in a statement read by Assistant Director of the Contagious and Terminal Diseases Department  Dr. Atef al-Tawil, denounced the renewal of the sanctions applied by the European Union to Syria, and depicted them as “a flagrant violation of the most basic human rights, mainly the right to health”.

“The resumption of coercive measures against Syria occurred at a time when the health sector was still rehabilitating the damage caused by the terrorist war that destroyed dozens of hospitals, health centers and equipment, and greatly affected health indicators which were considered among the best at the regional level,” he asserted.

Al-Tawil reiterated the need not to listen to rumors and unreliable information aimed at sowing fear and confusion among citizens and confirmed that the Ministry announces any new case of contagion or death through the national media, the website from the Ministry and its Facebook account.

He renewed the need for citizens to continue to comply with precautionary measures, despite the latest flexibility, due to the continued spread of the pandemic at the regional and international level.

“Currently there are two critical cases, a person with chronic disease and an elderly man,  and the treatment protocol is subject to permanent evaluation by a team of specialists and in accordance with international recommendations,” al-Tawil said.

He confirmed that monitoring teams continue their work in the provinces to diagnose any suspected cases, as well as follow up the cases of returnees who left the quarantine centers and are currently at home.

It should be noted that the number of Coronavirus cases registered in Syria has reached 123 cases so far of which 46 cases have recovered and 5 cases have died.