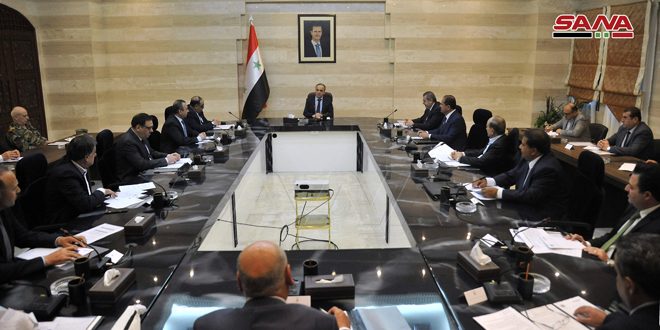 Damascus, SANA- The annual meeting for the receipt and marketing of wheat crop for the current season, chaired by Prime Minister Imad Khamis,  allocated SYP 450 billion to receive the whole crop of wheat, estimated at 2.9 million tons.

The cultivated area reached at 1.355 million hectares with 75 percent.

The participants in the meeting decided to transfer an amount of SYP 150 billion as first payment to the Agricultural Bank to pay the price of the delivered crop to the farmers.

They demanded all the concerned authorities to offer all necessary facilitations to facilitate the receipt process, including facilitating the cross of the harvesters, agricultural vehicles and transport cars, and providing the gunny bags.

Head of the Peasant’s Union Ahmad Saleh Ibrahim said, in statements to journalists, that the decisions aim at  serving the farmers, facilitating the receipt of the crop process and transporting it to the grins centres smoothly.

Director General of the Syrian for Grains Youssef Hussein Qasem said that 49 grins centers were established in all the provinces to receive wheat, in addition to the formation of receipt committees, rehabilitating the centers’ cadres and providing all necessary gunny bags .

Director General of the Agricultural Cooperative Bank Ibrahim Zaidan pointed out that there are 106 branches for the Bank in all Syrian provinces, indicating that an amount of SYP 450 billion was allocated to pay the price of the wheat crop to the farmers.

Zaidan added that a first payment estimated at SYP150 billion was delivered to the Bank’s branches.