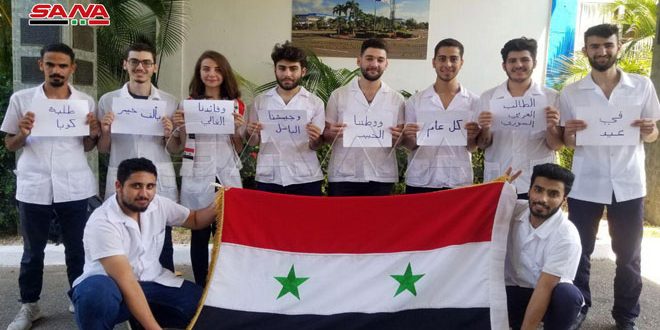 Havana, SANA_ The Syrian students studying at Cuban universities reaffirmed their support for the army, people and leadership of their homeland.

The National Union of Syrian Students, Cuba branch, stressed in a statement on Tuesday that the blood of the Syrian martyrs will continue to be the beacon that lights the way and the inexhaustible source of determination and commitment.

The statement, issued on the occasion of the 70th  anniversary of the Syrian Arab Student Day, highlighted the will of the students in Cuba to return to the homeland and contribute to the reconstruction process and be part of the battle against the enemies, extremism and terrorism in all its forms and forms.

The students expressed their pride in the heroism of their army in fighting global terrorism in various Syrian regions.