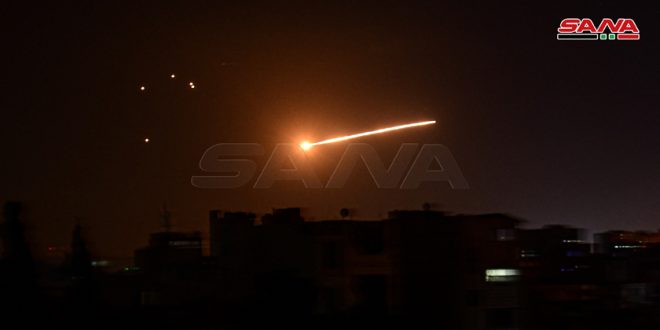 Damascus-SANA, The army air defenses intercepted on Sunday Israeli missiles that targeted the surroundings of Damascus.

A military source announced that at 23.25 p.m. of Sunday February 23rd, 2020و the Israeli warplanes targeted, from outside Syrian airspace and from over the occupied Syrian Golanو the surrounding of Damascus with a number of batches of missiles.

The army immediately confronted them with high competence, and destroyed the majority of them before reaching their targets, and verification is still going in the outcomes of the aggression.
Earlier,SANA reporter said that the army air defenses confronted a batch of hostile missiles coming from over the occupied Syrian Golan.
2020-02-23
bassel
Share
Previous Al-Jaafari reelected as rapporteur of UN Special Committee on Decolonization
Next Army advances in Idleb Countryside, liberates eight villages