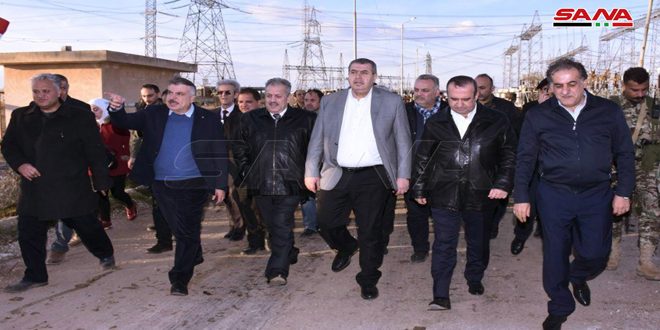 Aleppo, SANA- A ministerial delegation on Thursday inspected economic facilities in Aleppo westsouthern countryside, which had been liberated from terrorism. 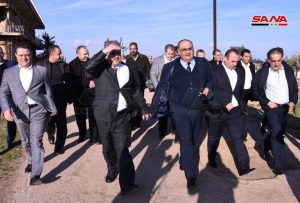 The delegation that comprises a number of ministers visited International Center for Agricultural Research in the Dry Areas (ICARDA) , power stations in ICARDA and al-Zerbeh , a poultry breeding facility, and a clothes factory.

The delegation inspected rehabilitation of Aleppo-Damascus international highway, including removing rocks and debris and painting sidewalks.

Speaking to journalists, Minister of Water Resources Hussein Arnous said that work is underway to restore services with the available capabilities to enable citizens to return to their villages, and provide facilitations to industry, tourism, and agriculture sectors.

For his part, Minister of Agriculture and Agrarian Reform Ahmad al-Qadiri said that the Ministry is working on setting a program aimed at providing support to farmers and resuming the agriculture work and production process in the areas which had been liberated by the Syrian Arab Army from terrorism south Aleppo. 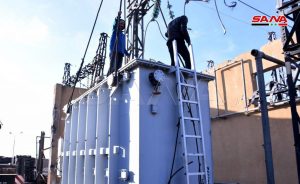 Opening roads , removing barricades and rehabilitating roads have been started , said Local Administration and Environment Minister Hussein Makhlouf, adding that the governmental support to Aleppo in service sector has reached SYP 2.5 billion, including a number of service and development projects.