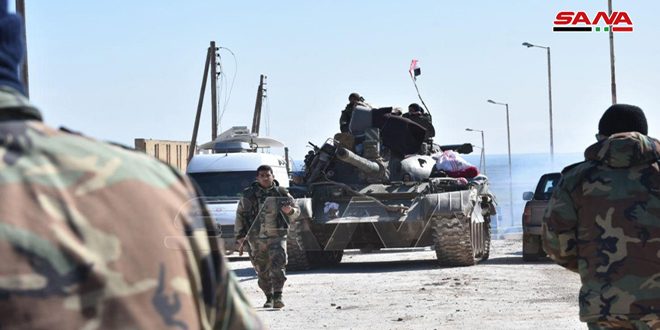 Aleppo, SANA – Following a series of concentrated military operations against terrorist organizations in Aleppo’s southwestern countryside all the way to the northwestern countryside, Syrian Arab Army units liberated the towns and villages in the surroundings of Aleppo city, securing the city from the recurring attacks of terrorists on its residential neighborhoods. 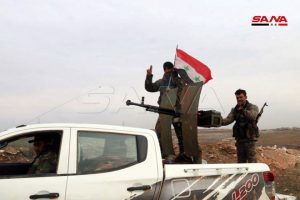 The reporter said the concentrated and precisely-planned operations resulted in massive losses among terrorists, causing their morale to collapse and they fled as the army advanced.

Upon hearing the news, the people of Aleppo took to the streets to celebrate this great victory and the security which was realized thanks to the sacrifices of the army.

On Saturday, the army units liberated Orum al-Kubra, Kafer Naha, Jameit Al-Radwan, Ajel and Owaijel to the west and southwestern of Aleppo city, inflicting heavy losses upon terrorists in personnel and equipment.

The reporter said that the army units started large-scale combing operations in Khan al-Assal and al-Mansoura to dismantle the explosives and landmines in parallel with the deployment of the Internal Security Forces in them to maintain the safety and security.

In Idleb southern countryside, the army units liberated al-Rakaya village to the northwest of Khan Sheikhoun village after a swift operation ended up with defeating the terrorists and inflicting losses upon them.