The army liberates villages of Sheikh Ali, Arada and Arnaz in Aleppo countryside 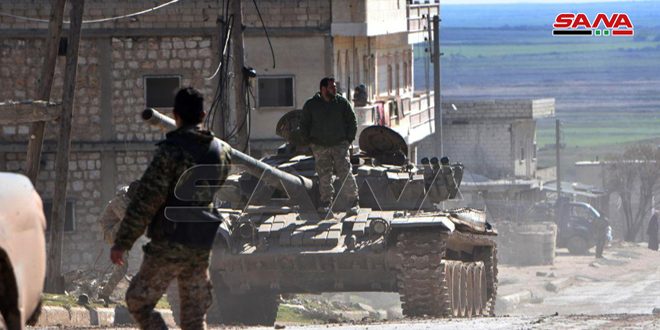 Aleppo, SANA-Units of the Syrian Arab Army on Wednesday went ahead in their operations against terrorist originations in Aleppo southwestern countryside, liberating villages of Sheikh Ali, Arada and Arnaz after eliminating the last dens of terrorists there.

SANA reporter said that following the liberation of Khan Al-Asal and al-Rashideen 4 yesterday, the army units expanded their military operations against terrorists in Aleppo countryside, liberating villages of Sheikh Ali, Arada and Arnaz to the west of Aleppo-Damascus international Highway.

The reporter added that the army operations ended up with the killing and injuring of many Jabhat al-Nusra terrorists, while lots others escaped amid a state of collapse and chaos among their ranks.

He affirmed that the army started acts of dismantling the mines and explosives planted by the terrorists.

The reporter added that the terrorist groups, on top of them, Jabhat al-Nusra, supported by Turkish occupation forces, attempted to launch an attack on Kafr Halab axis in the southwestern countryside, using vehicles’ bombs, but the army units destroyed them and foiled the attack.