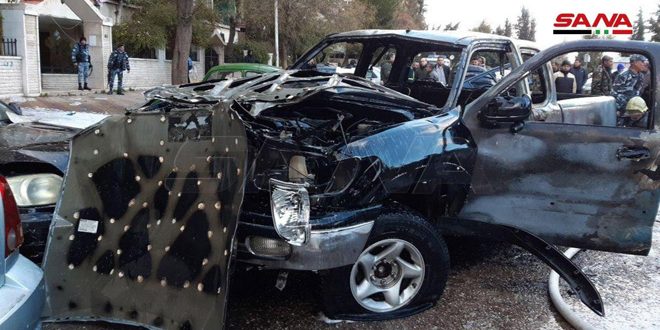 Damascus, SANA – An IED planted in a car went off on Monday afternoon in al-Mazzeh area in Damascus, injuring one person.

A source at Damascus Police Command said one person was injured by the explosion of the IED, which was planted in a pickup truck parked  behind al-Jalaa Park in al-Mazzeh area.

The source said the blast caused burns to the victim who was hospitalized, in addition to burning the car.

Damascus explosion IED Mazzeh 2020-02-10
m.eyon
Share
Previous Aleppo-Hama Highway stretch at al-Barqoum bridge after defeat of terrorists in the area – PHOTOS
Next The army seizes a network of Tunnels set up by Jabhat al-Nusra terrorists under strategic al-Eis hill (photos)