Damascus, SANA – Three civilians were injured when terrorists detonated an explosive device in al-Amarah residential neighborhood in Damascus on Tuesday.

A source at the Police Command told SANA that terrorists detonated an IED after placing it on a bicycle parked in the entrance of a residential building in King Fayssal Street in al-Amarah neighborhood, injuring three civilians and causing material damage to the building.

The source added that before setting off the IED, terrorists detonated a sonic explosive in the crowded neighborhood, which is located near the Grand Umayyad Mosque.

In Damascus Countryside, terrorists targeted Harasta residential area with mortar shells, causing material damage only.
A source at the Police Command told SANA that the terrorists launched two mortars on the area, adding that no human casualties were reported.
The attack caused material damage to the private properties in the area. 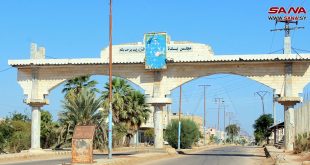